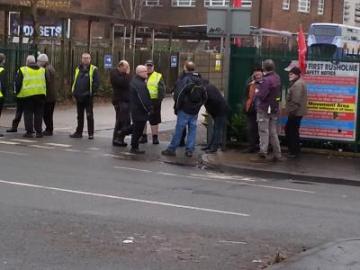 As one picket stated "at Rusholme we do exactly the same job with the same commitment to passenger safety as their colleagues across Greater Manchester – and when we are driving within the city centre, we are even overlapping on the same routes, yet we are being paid £5000 a year less"

As part of their campaign the drivers have been taking a series of strikes the latest of which took place on the 20th, 22nd and 23rd December. In an attempt to head off the strikes First Buses put forward an "offer" which amounted to little more than yet more promises to harmonize pay at a future date. The offer was put to drivers at a meeting outside the Rusholme depo and was unanimously rejected by a show of hands.

The drivers vowed to carry on their campaign to end the disgrace of workers being paid 23% less than than other workers doing exactly the same job for the same company.

This article was published on 23 December 2017 by the SolFed group in Manchester. Other recent articles: