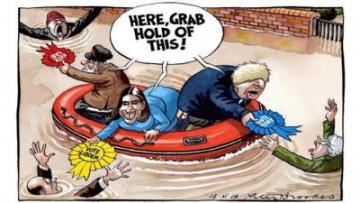 Given all the hype emanating from much of the left about the wonders of the Labour Manifesto, it is hard not to get carried away. After watching the latest uplifting interview with Labor’s John Mcdonnell you can suddenly find yourself unconsciously humming “oh Jeramy Corbyn” as you set about washing the dishes. Given all this hype, it is perhaps then worth having a bit of a reality check and assessing what the Labour Party is actually promising should they get elected.

Similarly,  Labour's plans to put workers on boards and renationalise, water, rail, mail and energy networks will only bring the UK in line with what already takes place across Europe and much of the world. Nor is Labors proposals for a 50% tax rate for those at the top of the income scale that radical when compared with taxes on UK higher earners in the past. For example, the tax on top earners was 90% through the 1950s and 60s, rising to 98% in 1974.

The fact that Labour's tax and spend proposals are pretty modest is reflected in the parties plans on welfare spending. According to  the Institute for Fiscal Studies, Labour's programme would only see a quarter of the cuts imposed during the last 10 years reversed. Hardly the break with austerity lorded by Labour. But more worryingly Labour’s failure to reverse cuts could, in effect,  “normalise” or “bake in” austerity making the current low levels of welfare spending a permanent fixture in the UK.

Behind the hyperbowl then, much of the labour programme is pretty standard social democratic stuff. It may seem attractive when compared with that obnoxious blob of an individual Boris Johnson but it would only steer the UK economy back to a more European style mixed economy at best. As such Labour’s aim is to save British capitalism rather than to end it. The neo-liberalist free market model has failed, as even the likes of the IMF are now begrudgingly admitting and Labour is offering a slightly more viable alternative.

The answer however does not lie in trying to nudge the uk economy back to the centre ground of Europe, let’s face it, European  social democracy is hardly thriving in the face of globalization. Rather we need to organise a  radical grassroots movement that can challenge the failing of capitalism directly. When it comes to saving the planet, rather than the tired, worn out ideas of social democracy, give me Extinction Rebellion everytime.

This article was published on 2 December 2019 by the SolFed group in Manchester. Other recent articles: