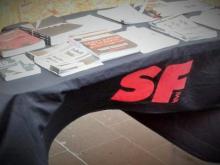 SF have once again appeared on the streets of Liverpool after an absence of more than two years. Recently joined members have moved into the city, and have been in contact with the Manchester local.

So, at the end of last week, SF members from both cities organised a literature stall and leafletted members of the public. We met with a generally positive reception from passers by, with one giving us a donation, a few taking additional literature for their mates and 'Stuff Your Boss' getting its usual amused response. 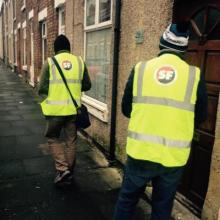 Since starting our Better Call SolFed campaign at the end of 2014, we have seen a massive amount of effort being put into door-to-door leafleting publicising Newcastle SF as a small, radical union that fights on its own terms. The response has been fantastic - we have been as equally busy answering calls asking for advice and support from workers in the North East; we also kept in regular contact with someone as far away as Liverpool!

As well as regular contacts with disgruntled workers, we have also taken on new members in Teesside and Wearside. And with this new growth, we have began extending our door-to-door leafleting beyond Tyneside (here's a photo of some our members in Teesside today). Keep an eye out for coming newspaper ads!