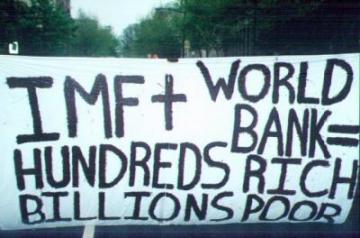 Following on from our recent post on the World Bank and climate change comes more bad news from the Bank. In the World Bank’s flagship 2019 World Development Report, entitled the Changing Nature of Work, the  Bank argues for wide-ranging deregulation of labour; deemed necessary to prepare countries for the changing nature of work. The report sets out a nice cosy capitalist future under which firms will be relieved of the burden of contributing to social security, have the flexibility to pay wages as low as they think fit and have the power to fire people at will.

Needless to say, the World Bank report has nothing to say about the worldwide decline in worker’s share of national income. Nor does it bother to look into the undermining of working conditions through deliberate corporate strategies such as outsourcing and bogus “self-employed” classification. Instead, the report goes on to support companies like Uber by agreeing that their workers were not employees but were “emerging as a separate labour category”.

In arguing for ever greater deregulation, the report points out that regulation  “protects the few who hold formal jobs while leaving out most workers”. Therefore, in an admiral show of egalitarianism, the report proposes to trash all working conditions to ensure everyone gets to be equal! The report goes on to point out that, in the age of automation, “Burdensome regulations also make it more expensive for firms to rearrange their workforce to accommodate changing technologies.”

This free market claptrap has no relation to realities. The idea that ever greater deregulation of the labour market will somehow miraculously result in a high-tech economy, populated by a highly skilled, highly paid workforce is a joke.   As can be seen from our own beloved economy, where ever greater casualisation has resulted in firms holding back from high-tech investment, due to there being few savings to be made when the cost of labour is so cheap. This has resulted in Britain becoming locked into a low-wage, low-skill, low-productivity economy, in which wages are state subsidised and workers make up for a lack of earnings power by taking on ever greater debt.

Since the publication of the draft report,  there have been growing condemnation of the World Bank. For example, Oxfam argued the report's emphasis on social protection put the costs of supporting workers and poor households on the government, letting employers off the hook. Going on to state “The World Development Report casts serious doubts over the commitment of the World Bank to reducing the gap between rich and poor,”

What is more shocking however is not that the World Bank is supporting big business, but rather why organisations such as Oxfam and the  International Labour Organisation are shocked by the fact. The Bank was set up by western capitalism immediately after the second world war to act in its interest. And the World Bank has certainly delivered.  Since its inception, the Bank has been used as a tool for fighting the cold war, a means of maintaining western capitalism’s power over of the developing world and a way of imposing free-market policies on countries in return for bailouts.

The very first World Bank loan was made to post-war France on the strict understanding that public spending was to be slashed and loan repayments made the priority; with the loan only made on the condition that communist supporters were removed from the French Government.

After the introduction of the Marshall Plan in the immediate post-war period, the bank turned much of its loving attention to the developing world. Where it immediately started charging developing countries far higher interest rates for loans than commercial banks. Leading to calls for the bank to be reformed with some countries even arguing for the developing world to set up their own bank that would prioritise their interest.

Undeterred the Bank began to target loans on projects designed to increase the developing worlds ability to export raw materials, at the same time refusing to support projects designed to satisfy domestic demand. All of which was aimed at increasing the developing world's dependency on western goods. Just to make doubly sure, the World Bank began to give loans on the condition that countries purchased goods and services from the developed world in return. As a result during the first seventeen years of the World Bank, more than 93% of the money lent came back each year to the industrialized countries in the form of purchases.

By the 1980s, the World Bank, and its partners in crime the IMF were being used to impose free-market dogma in the form of structural reform programmes. Under structural reform programmes, in return for loans, countries were forced to slash public spending, deregulate labour, cut salaries, pensions and welfare, stop food, rent and fuel subsidies, introduce widescale privatisation and smash organised labour.  A World Bank playbook that was to be used in the former Soviet Union countries in the form of “economic shock therapy” and also by the increasingly sainted EU in Greece during the Eurozone crisis.

And the World Bank free market playbook is still very much in play today. While writing this post news come from the Solidarity Federation’s sister organisation in Poland, the ZSP, that the World Bank is currently advising the Polish government on how to go about privatising state owned housing.

The reality is that the World Bank, behind all the platitudes about reducing poverty and equality, is a capitalist institution whose priority is to support the interest of capitalism. As such it has to be opposed  just like the capitalist system that created it.

This article was published on 5 January 2019 by the SolFed group in Manchester. Other recent articles: