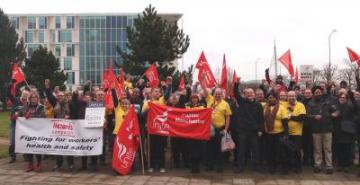 Union members at Fujitsu have announced a series of strikes—as bosses dismissed victimised reps. The first walkout will begin on Wednesday 24 January. Management sacked two reps over the christmas with one of the reps being dismissed  while he was on compassionate leave to attend a family funeral.

These are just the latest attacks in a long running dispute over compulsory redundancies, victimisation of reps and breaches of a redundancy agreement. IT workers at Fujitsu in Manchester have already taken 27 days action in this long running campaign and plans further  strikes  on Wednesday 24 – Friday 26 January, Tuesday 30 January and Thursday 8 February – Wednesday 14 February. Union members are also taking part in action short of a strike and are working to rule.

Fujitsu announced it planned to chop 1,800 UK jobs in 2016 in order to boost profits. Since the announcement they have attempted to undermine  workplace organisation by a campaign of harassment of union reps, as a means forcing through redundancies and cuts to pay and pensions.
Workers seen as troublemakers have also been targeted as part of an attempt to create an atmosphere of intimidation amongst the workforce. One worker was sacked before the company had even bothered to investigate her grievance, she had complained of sexual harassment which then resulted in her being  immediately selected for redundancy.  Not too surprising given that one of the central issues in the  this long running dispute has been the 16% gender pay gap under which women are paid on average £5,500 less than male colleagues, which Fujitsu have steadfastly refused to discuss with the unions.

Yet Fujitsu in the UK  to a big extent  is a publicly funded company with over half of  of Fujitsu’s contracts in the public sector. For the last two decades the company has received vast amounts of public money with government contracts estimated to be worth over £640m. Public funding that enabled Fujitsu to make £86.5m profit in the UK last year. Needles to say while cutting jobs, driving down pay, slashing pensions and discriminating against women, the directors found the money to give themselves a massive pay rise, with one director getting  a 13 per cent pay rise to £1.635m.

Fujitsu is yet another publicly subsidised company, making vast amounts of money for investors and directors at our expense, while being allowed to wreck workers lives. The tremendous solidarity shown by the UNITE members at Fujitsu should be an inspiration to us all and they should have all our support.

This article was published on 17 January 2018 by the SolFed group in Manchester. Other recent articles: