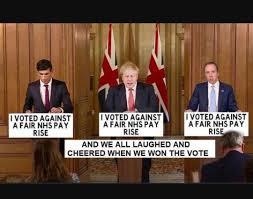 Whatever happened to free market solutions? Since the dark days of Thatcherism, we have been told that the state is inefficient and things should be left to the free market. Yet here we are in the middle of the coronavirus crisis and free market solutions are nowhere to be seen. Instead, it has been the state that has been forced to step in and prevent the economy and society from collapsing amid the chaos of an out of control pandemic.

This is not to say that the free market zealots have disappeared, far from it. Fearful of anything that might smack of state control, the government has thus far shown a remarkable reluctance to step in and take direct control of industry, even where it is clearly necessary, as in the case of the production of PPE. Instead, it has largely limited its activity to trying to purchase PPE on the world markets at vastly inflated prices, rather than looking to boost production here.

True, the government did put out a rather insipid appeal to companies capable of producing PPE to contact them. But this is hardly reorganising production in order to ramp up our ability to produce enough PPE. This reluctance to directly intervene contrasts badly with past governments. For example, during the second world war, government stepped in to control and coordinate the economy. To quote one author “lingerie factories began making camouflage netting, lipstick cases became bomb cases, beer cans went to hand grenades, adding machines to automatic pistols, and vacuum cleaners to gas mask parts”.

Both the government and media have not been slow to stoke up patriotic fervour by constantly comparing the COVID-19 crisis with the war. Perhaps it might be a better use of their time if they stopped banging on about Vera Lynn and try to learn a few lessons from history instead. Surely, even with an economy with manufacturing bases that have been eroded for decades, it is not beyond the capabilities of the current government, to take control in order to ensure adequate supplies of PPE and, for that matter, testing and eventually vaccines.

Should the coronavirus crisis fail to abate, rather than relying on Boris Johnson and his gang of personality-free ministers, perhaps we should learn a few lessons from history ourselves. During the 1936 Spanish Revolution workers in Catalonia took control of over 3,000 enterprises and reorganised them under workers’ control, unleashing a wealth of creativity that resulted in remarkable improvements in working conditions, productivity and efficiency.

This was not least in the health sector, with a new health service being created to ensure that people, for the first time, had free access to medical care. While still combating the forces of fascism, in just a few months, the workers of Catalonia were able to build six new hospitals and nine new centres for dealing with chronic disease.

The coronavirus has confirmed what many people have long argued, that free market capitalism is no way to run a country. No doubt, we will muddle through the current pandemic; we might even get through without the world tipping into recession. But going forward, we still face the problems of climate change, permanent economic instability and gross inequalities in access to all sorts of resources. If anything good is to come out of the horror of the coronavirus, let’s hope that more people come to realise that capitalism is not fit for purpose and that we need to start working towards an alternative.

A good introduction to how workers in Catalonia reorganised the economy during the 1936 Spanish Revolution can be found here: https://libcom.org/book/export/html/1733

This article was published on 25 April 2020 by the SolFed group in Manchester. Other recent articles: