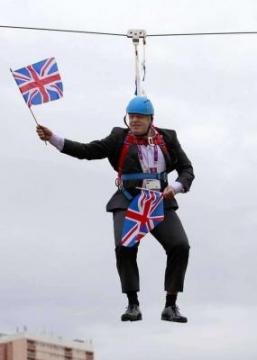 Great news that Boris is now out of hospital and resting at Chequers after defeating the coronavirus. Where others have succumbed to the virus through lack of willpower, our brave Boris took on the virus, and showing true Dunkirk spirit, single-handedly beat the virus through pure strength of character. It was great to see the press exercising their right to criticise and hold to account, in the world’s greatest democracy, by falling over themselves to heap praise on our truly courageous leader. Totally disregarding the acute suffering of the thousands who have died in hospital, the media was able to lift the spirits of the nation by focusing on the high spirits of our leader from is ICU bed and his whiling away the hours in hospital by reading the comic book Tintin.

The nation can now look forward to the return of battling Boris to the daily government briefing. During which Boris will once again demonstrate that, though he has been run a close second by ministers during his absence, he is the supreme master when it comes to answering questions by talking a lot while at the same time saying absolutely nothing.

Now that Boris has his hand again on the tiller of government, we can now look forward to the return of inspirational leadership. The same inspirational leadership that, disastrously delayed the lockdown, joked about washing hands, gave us the nonsense of herd immunity, went missing in the crucial weeks of February, made a complete hash of testing, left health and careworkers without  PPE and has failed to coordinate the production of ventilators.

The government, with the help of her majesty and a servile press, has been able to deflect government away from its disastrous and chaotic handling of the crisis by turning the narrative into one of national character and fighting spirit. Meanwhile, away from this jingoistic nonsense, thousand suffer and die unnecessarily.

This article was published on 14 April 2020 by the SolFed group in Manchester. Other recent articles: