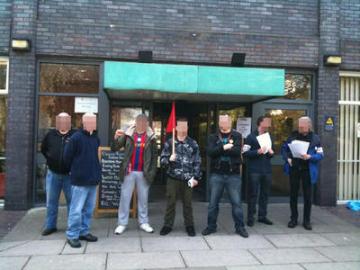 There was almost a disappointed resignation to this fact, and to the broader number of students not respecting picket lines, in some places. Combined with the sheer volume of university entrances, this meant that there were a lot of tiny picket lines spread across a large area, with individual strikers handing out leaflets - one aimed at staff, one aimed at students. At some entrances it was students from the Merseyside Network Against Fees and Cuts who were the picket line.

When 10 o'clock arrived, we found ourselves by a lecture theatre that had no picket line in front of it. With students due to attend lectures at this time, we put practical solidarity into action and formed the picket ourselves. This allowed us to engage with the students and to ask them to show support by refusing to attend lectures. We were able to turn several small groups and individuals away, though far more people crossed when in large masses. Nonetheless, it brought home the message that this was not a normal day and hopefully has encouraged people to think hard about the attacks we're facing as a class at present and the need to stand together

Particularly gratifying was seeing one large number who refused to honour the picket line have to walk back out again because their lecturer was on strike anyway.

After this, we visited several other picket lines to express our support and offer solidarity, before heading to the rally at University Square. There, the message was the same - we are facing attacks as a class, and workers from all sectors and students need to stand together against them. There were no calls for militant direct action, but there is certainly a growing realisation amongst rank-and-file workers that we need to make the cuts the more expensive option if we want the government to back down.

Liverpool Solidarity Federation will continue to support workers in struggle on the streets, in occupations, and on the picket lines. To defeat the attacks by the government, we need working class unity and the will to make the cuts impossible to implement.

This article was published on 24 March 2011 by the SolFed group in Liverpool. Other recent articles: