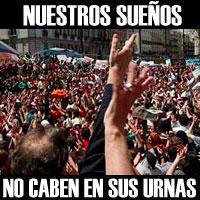 A statement on the May protests by the CNT, our Spanish sister section.

The countless demonstrations and occupations that are taking root in the main squares of cities and villages since the 15th are a clear example of the organizational capacity of the people when they decide to be the protagonists of their own lives; overcoming apathy, resignation, and the absence of a self-awareness with which to articulate solutions to take on and construct alternatives to the many problems that today face all of us: workers, the unemployed, students, immigrants, retired, the casualised...

The organizational formulas developed in these mobilizations prove the viability of direct participation through assemblies for taking decisions that channel our aspirations and demands and make us overcome individualism. We become protagonists, rather than spectators of a system based in representation and delegating authority, which erases our individuality. Assemblies, a rotating microphone, working groups, responsibility, capacity, organization, self-responsibility, coordination, involvement and visibility are the collective teeth that move our gears, capable of challenging the institutions and provoking an expectation and public debate that have eclipsed the electoral campaign and the recurring contents of the national and international press.

The illusions generated by the massive mobilizations shouldn't allow us to forget that this situation will be an object for instrumentalization, distortion, and management by political, social, and union groups; these groups are even more afraid than the government of losing the small amount of legitimacy that they have left in the minds of some citizens. Likewise, the proposals and messages emanating from these mobilizations must be analized in-depth. Overcoming the two-party system and gaining a modification to the Electoral Law will not make us freer, nor will it favor individual sovereignty. We must state that the demands are centered in the necessary sociopolitical changes; but there is a lack of denunciations or proposals discussing the world of work – clear and explicit denunciations of the collaborationist role of the institutional union federations, of the Labor Reform currently in force, and of the wide legal margin for implementing layoffs and destroying jobs...

Disobedience is the fundamental element that, since the 15th, has characterized all of the mobilization and expressions of protest. It is challenging and defying once again the repression and the attempts to hold back the occupations that are coming from various offices of the government and the Electoral Commissions; it is further strengthening the participation, involvement, and self-awareness of our need to organize ourselves. Disobedience is a collective pulse that demonstrates our overwhelming force when we work together and decide not to give up on our demands. It is a throb in our hearts that fuels an awakening of consciences that will allow us to react, and to extend our mobilization, our solidarity, and the overcoming of the fear that neutralizes struggle.

“Any night the sun could rise” [*], and in Madrid's central square we've already spent a week avoiding the sunset. We have materialized our practice, that it is not only possible but necessary to work together, unite, and fight to change our immediate present and to outline from our self-organization the pillars of a society without power, inequality, repression, and delegation of authority. On May 22 [Election Day], more consciously and visibly than ever, we will respond with abstention, because we ourselves have demonstrated that the politicians do not represent us, nor do we need them.

From the CNT, we will continue participating and calling for a permanent mobilization and struggle, as a means to resolve the problems in all spheres of our lives.

We continue to build at the same time as we disobey. The protest continues!

Night or day, the struggle is ours!