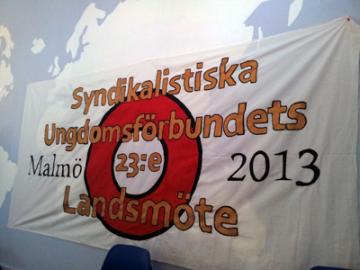 SUF's strategy is one of class struggle and anarcho-syndicalist direct action solidarity and they are organised federally. They are of similar size and number to SolFed. They have no upper or lower age limits but generally members will encourage themselves to leave the group at around 27.

Malmö is known as the "Crime City" for its reputation as the capital of crime in Sweden, despite the crime rate being comparable to the larger cities. The town is traditionally an "immigrant town" and the nickname is useful for politicians to propagandise cynically on a racist anti-immigration slant. Malmö's popular roller derby team the Crime City Rollers have reclaimed the moniker and I must admit, it's a fantastic name for a sports team. 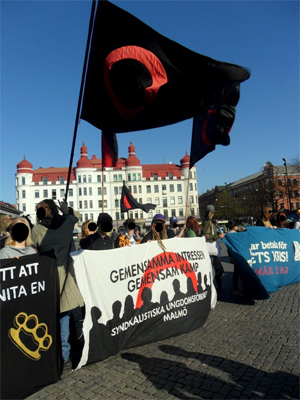 The conference was split over three days, held in a school just outside of the main town. Delegates, observers and participants from ten SUF locals greeted and socialised over dinner in the evening and prepared themselves for the proceedings the next day. The other International delegates were from "Motmakt" (Counter-Power) a Norwegian platformist group who are newly established and growing quickly.

The conference itself took place in a similar manner to our own, with local groups and organising committees represented. In addition four members make up a "presidium" which is two chairs and two secretaries in order to chair and document the proceedings. The International Committee even provided live translations for me. As well as discussions on strategy, activity, internal democracy and upcoming campaigns "auditors" are elected to scrutinise the work of organising committees over the coming year. Voting on the submitted motions happens near the bottom of the agenda.

I mustn't forget to add that there was a 5 minute break every hour, allowing for coffee and tea. Perfect! This lot know how to consume coffee, let me tell you. I was perfectly happy with the breakfast tea, however.

After reports from local groups and national committees there were rotating group discussions on the internal democracy and communications, anti-sexism and the international and outward face of SUF. These discussions were lively, informed and extremely interesting. Among the reports it was interesting to hear from the Women's "Seperatist" Group, who organise events and activites for self-identified women members of SUF regularly. This group acts as a fully functioning network within SUF, which is how I'd imagine and hope the Womens Network in SolFed could one day function.

International observers were given the opportunity to introduce themselves and briefly explain how their organisations work. I gave a brief overview of SolFed in its history, composition and current activity which was well received.
Lunch was fantastic! Home-made falafels cooked and prepared by members of SUF Malmö. In Malmö you can't move for falafel, and during my time there I partook at least once every day. Viva Falafel City! 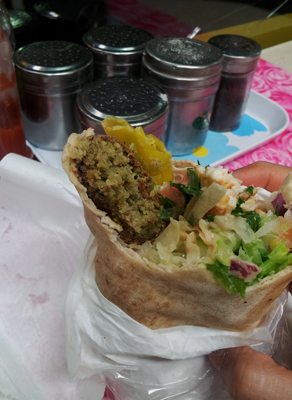 Following lunch, SAC members gave a talk on a new youth employment directive from the Swedish government which means that workers under 23 are only paid for 75% of their work, a plan which has seen collusion from the reformist unions in order to provide free labour for private companies. SAC propose that they and SUF work together to oppose and kill the government's plan. In discussions I commented to say I felt this is somewhat similar to Workfare schemes in the UK in its aims and operation and made some suggestions for combating the scheme based on similar lines. The SUF have the advantage that SAC is a strong organising union with thousands of members and SAC have the advantage that the SUF can often take more radical actions than the union. A co-ordinated campaign could be most effective and help the two organisations continue working more closely. However, SUF members are wary of being and being seen as the footsoldiers of the SAC. The struggle continues.
Later followed a demonstration of the voting procedure using a powerpoint presentation and a role play of a motion and amendment being proposed and voted on using Harry Potter house names (SUF Dumbledore's Army is something I wish existed). This allowed new conference delegates to learn the procedure and remind others in a less serious atmosphere and appropriately youth-orientated. Ankh Morpork SolFed could shamelessly steal this idea for our own conference. 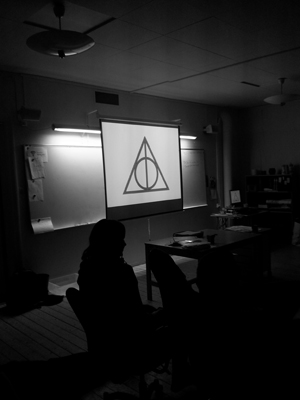 The rest of the afternoon was devoted to motions and voting also happened the next day.  SUF has a strict no alcohol policy for all official events, meetings and socials. In the evening members socialised, remaining in the school and some took turns painting a special anniversary banner. The conference adjourned the next morning.
I must confess I travelled to Sweden with a rather jaded and cynical outlook and wondered exactly what I would take home from my trip. Upon witnessing the SUF's organisation in such numbers, spirit, enthusiasm and practical solidarity, I left really inspired by this group, it's strategy and their optimism. Comrades, the SUF is an organisation which struggles firmly in the 21st century and there are many lessons we can learn from the accessibility of the group and both the internal and external images they project. By its very nature the SUF must have a regular turnover of members, but this hasn't stopped it swelling and forming new local groups  every few months. As a member of SolFed, our reputation preceded me here, but I was quickly humbled by the friendliness and power of the group and I am determined that the Solidarity Federation should grow and demonstrate similar discipline.