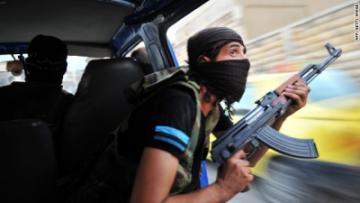 I am Mazen ******, a Syrian anarchist . I want to inform you about the difficult humanitarian situation in my country, Syria ; due to the brutal oppression of the regime against the revolting masses. A group of young Syrian anarchists and anti – authoritarians from Aleppo – Syria, contacted me asking for urgent help. Their community is in urgent need for everything : medical drugs , tents , children milk , etc; almost everything. We hope that you can help them to alleviate the sufferings of Syrians in these difficult days.

About the actual situation in Syria, it is deteriorating rapidly. After the killing of the some high rank generals of the regime (defense minister and his deputy , which is at the same time the brother – in – law of the president himself ) by unknown force, even that the Syrian free army claimed responsibility for the attack ; the armed opposition groups attacked the two main cities , which were reluctant to join the revolution before : Damascus and Aleppo. A fierce battle started , after some early gains of the opposition forces, the Assad army gathered its remaining forces  and started a counter attack using his available conventional forces including jet fighters , beside canons and tanks that he was using since months ago. Many civilians had to flee in very harsh conditions, hundreds massacred.

In fact , the Syrian revolution is caught now in an open armed fighting. The peaceful demonstrations lost their significance now, and almost nobody bother to mention them or think they can have real impact on the outcome of the struggle . what started as a spontaneous mass revolution has become an armed struggle between the regime army and its armed opponents. This happened mainly due to the brutal oppression of the regime, using its army, its tanks and guns against civilian neighborhoods , but also because of the intervention of tyrannies like Saudi and Qatari monarchies.

Due to the strategic position of Syria, the revolution was caught in Iran – Saudi rivalry for regional domination, and even between Russia and US , each supporting one part , but only for the sake of their own interests : we can't believe that the Saudi monarchy bother about the freedom of the Syrian people , they just want to weaken their opponent : The Iranian Islamist oppressive regime. Saudi Arabia and Qatar did all they can to divert the Syrian revolution into sectarian struggle between Sunni and Shiaa sects of Islam , cynically , the Syrian regime did the same.

Just recently an influential Saudi journalist described the Arab spring ( this term is used to describe the sequence of Arab revolutions) as a Sunni spring that threatened shiia Iran. The other competing camp of oppressed regimes are using sectarianism for their sake also. The Syrian regime is trying to do the same by promoting himself as the "protector of religious minorities" in Syria .

We saw it very differently, we saw it as it happened and as it started, a spontaneous mass revolution against dictatorships and their neo – liberal policies and "reforms", and in this difficult moment for the masses; we count on the masses, on the oppressed, from every religion , sect , or ethnicity to unite against their oppressors, whatever their religion. We count on organizations like our comrades from Aleppo and other initiatives done by young students and some workers. It is a difficult struggle that could descend into sectarian civil war, and there is no guarantee but the masses' determination (and ours) to continue the struggle for real freedom and justice , for free self – organization of the oppressed .

In fact , there is very big divisions now in the Arab and Syrian left : the Stalinists stood beside the regime as an "anti–imperialist" regime ; as usual , they can neglect the oppressive nature of the regime , it is so natural for them . There are three Syrian "communist" parties , supporting the regime fully very shamelessly . Other prominent Stalinist parties in Arab countries support the regime also. On the other side Trotskyites stood against such regimes but they see Islamists as a possible "allies" is such struggles , denying the reactionary, authoritarian and capitalist , even the neo – liberal, nature of the Islamists ' project. This is so true for Egypt where Trotskyites had strong organization: Revolutionary socialists.

Another thing, brothers, I am going back to Syria this august in order to join the struggle of our comrades and masses. Some Syrian activists organized a campaign named WE ARE COMING BACK . We will enter Syria in August from *****. It is expected that the regime will arrest us, and they could torture some of us, or even kill some. I might need your solidarity that time. Some comrades might update you about such developments when it happen. For the time being I am still in *****, Egypt. If you can arrange any support for our comrades inside Syria you can contact me here till that time, and before leaving to Syria; I can give you contact details of our comrades inside Syria or some Egyptian comrades here to send your contributions to. Thanks a lot for your solidarity.

Some details have been redacted for the safety of the comrade concerned.