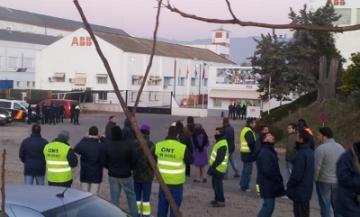 Outsourcing of workers at the ABB factory in Cordoba is currently being used as the pretext to get rid of militant workers, leading to 34 workers being fired.

The strikers claim that the redundancies are not valid and considered them a clear retaliation for the strike. They demand to be reinstated by ABB or outsourced by ADECCO - EUROCEN.

On Wednesday EULEN fired all the workers on strike since November 28.

EULEN has claimed that it fired the workers because of the loss of its contract with ABB, where it was replaced by ADECCO - EUROCEN.

Among those dismissed is the entire Strike Committee. Nine of it 12 members already had been dismissed on 31 December.

For the strikers and their unions, this nothing more than the culmination of ABB's strategy to get rid of the workers on strike, with the collaboration of EULEN and ADECCO - EUROCEN.

These dismissals just hide a strategy of repression against union organizers and workers who had struggled for a long time against arbitrary dismissals, for a more equitable agreement and greater job security.

Significant progress had been achieved in these struggles with the effect of a increase in service for ABB. ABB has been using EULEN all this time so as not to assume its working relationship with these employees, many of them who have worked for ABB for 10-15 years.

The workers consider that the replacement of EULEN by ADECCO-EUROCEN was triggered by the possibility of resolving the appeal of EULEN before the Andalusian High Court of Justice, about the possible implementation of the metal workers' collective agreement, which would be favourable to the worker sand the recent complaint about the movement of large transformers at the ABB factory, in breach of safety standards, which caused the intervention of the Labour Inspectorate. The replacement of EULEN by ADECOO - EUROCEN was a way to get rid of an inconvenient staff, with seniority, rights and organization.

So since January 1, Adecco has come to play the same role of labor intermediary, and scabbing against the strike, in the service of ABB.

The strikers soon expect a trial date for claims brought for infringement of the right to strike, which would allow us to return to the situation existing before December 31.

Knowing about the dismissals, the workers held an assembly in which it was decided to continue the struggle, with constant presence at the gates of the factory, as well as to plan several actions and demonstrations in the center of the city to demand their reinstatement by ABB or being outsourced by ADECCO-EUROCEN.

Next week they hope to intervene in the Municipal Plenum on January 17, which local groups and the mayor committed themselves to during the earlier protest at the Municipality.

Likewise, the call continues for solidarity demonstrations on the national and international level. These have already taken place in different cities and countries.