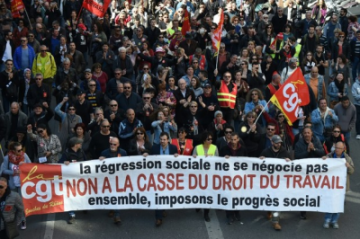 About the situation in France

For the last 3 months, France has seen a strong social movement protesting against a reform created by the government, and supported by the employer´s federation (MEDEF) and the parties on the right.

That reform plans to change the Labour Code and destroy the social system that French workers have fought for centuries to establish. The project is aimed at changing the power balance between employers, workers, and the government.

In response to this offence, trade unions, political parties, and more largely the left has organized in all parts of  France.

Students -as it is always the case in France- have been occupying their colleges and universities since early March. Squares around France have been occupied by a movement calling itself “Nuit Debout”, starting a public debate and giving a space for a convergence of different political struggles. In some cases, this movement has led to actions like protests against police brutality (which has been a huge issue during the unrest), solidarity with migrants or spontaneous demos across cities.

Despite the large opposition to the government plans, on May the 10th French Economic Minister Manuel Valls passed the reform, bypassing the Parliament.

In response, unions and workers in general, have been organizing protests since the 23rd of May. Various strikes in refineries, nuclear plants, printing plants, public transportation and even the healthcare sector have been paralysing France’s economic activity.

Those calls for renewable strikes have been mainly led by the CGT (the main union in France) and have been quite widely followed. 16 out of 19 nuclear plants are at the moment on strike and controlled by the workers.

A union rep of the CGT has said that on the ground, actions are voted on and are taken if the majorities agrees, without any orders from the head of the union. That has led to various actions regarding the energy sector involving electricity cuts in government offices, and price cuts for some customers and neighbourhoods.

In the region of Paris, the figures are quite high. In the SNCF (“National Society of French Railways”) of Northern Paris, 95% of the mechanics and drivers are currently on strike. 84 councils are now starting to bury garbage into tips because of the collector´s strikes. Last June the 14th, thousands marched in the streets of Paris, having serious confrontations with the police.

Meanwhile, the government is not stopping its provocations. France´s Economic Minister told the workers to go back to work "if they wanted to have the same suit as he was wearing" and the Parliament tried to remove the 35 hour working week in early June.

Those insults have been taken seriously by unions and demos are still going on, at least once every week.

The repression has been strong. Anti-riot cops have been in the streets during every demo beating up activists, gassing them, etc. Students and workers are often together on the front line, fighting against the repression. Some union offices have even been raided by police, such as the CNT office in Lille, which was completely destroyed.

Day after day, things are escalating, renewable strike action has been declared by most of the unions (CGT, Solidaire, CNT, FO, and even the CFDT that was mostly in support of the law). Neither the government nor the workers are giving up.

The future of the struggle is still unclear, but the protests are definitely not ending any time soon. Disruptions of the upcoming Euro Football Tournament are being planned, strikes at airports have already started to try to disrupt the arrivals for the event.

This article was published on 17 June 2016 by the SolFed group in Brighton. Other recent articles: