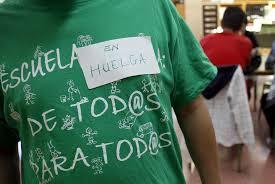 An EWN member participated in a school sit in in Almensilla, southern Spain organised by Marea Verde, a grassroots movement to defend public education.

There were about 100 people in the sit in when we arrived, teachers, parents, and teachers from other schools around the province. We did a go-round where people spoke out from the heart about the school, about free education, about their jobs, about losing their jobs, about working too many hours, about their fears for their kids, and, inspiringly, about wanting to go on indefinite strike.
There was a presentation, very clear, to the point, and chilling, about what the government has in mind for state education. Many jobs privatised, a reduced range of subjects, children seen as “less able” pushed onto a track with inferior prospects, it was all horribly familiar. What was different was seeing such a strong response, with parents and education workers taking direct action together. We knew that there were other actions happening at the same time and there were cheers when someone announced that there were 100 school sit-ins happening in Mallorca.
The Spanish education system is more egalitarian than the British system, with comparatively low university fees and less competition between schools, and more job security for teachers. This is all changing, with private sector “efficiencies” being brought in and a more limited, employability-driven education for working class children. Teachers in temporary posts are being laid off in huge numbers, 4,500 in Andalucia alone, in an austerity drive, with permanent teachers having to work extra hours to make up for it. The permanent and the casualised teachers are working together in Marea Verde (Green Tide), which organises through assemblies of parents and education workers in schools.
The occupation was very friendly and welcoming, with people talking and talking from 3pm to midnight about everything under the sun before finally everyone went to sleep exhausted. I was very happy to participate in the sit in, and see a movement which was very down to earth and very open, and was determined to fight for access to education for all.