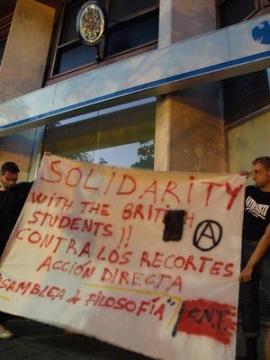 On Friday 7th of Febuary, a group of sixteen students and workers of our sister anarcho-syndicalist union in spain, the CNT, held a protest infront of the british consulate in the capital of tneerife in canary islands. This was their first action of solidarity with british students against the cuts in eduaction.

The comrades handed out information to everyone in the street during that morning, but promised this would not be their last action of solidarity. On Friday 25th of march, the Tenerife comrades protested inside the local university, “Campus Guajara”, a day before the TUC demo in London. They have plans of action for the coming week.

On their website, Tenerife CNT states that the struggle in the UK is, “no different than the situation that exists where the rise of Canary Enrolment, the distratous implemtation of the European Convergence Plan, and cuts in funding for public schools”, all of which are an attack on the Spanish working-class.

International solidarity and direct action such as this will be recipicated in kind as our duty, for oppression against the working-class is global, and so to must the resistance.

This article was published on 25 March 2011 by the SolFed group in North London. Other recent articles: