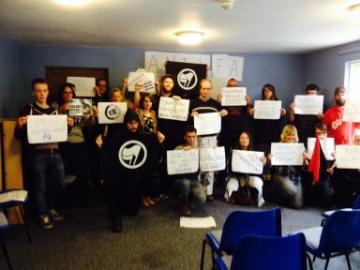 The Revolution Starts in Swindon

We may have been exaggerating a little with the title, but Swindon radical Bookfair (Sat 21st of September) was a step in the right direction. It was a great opportunity for radicals from the town and the wider region to meet up and share information and a chance for other Swindon locals to get involved and find out about their towns radical past, present and (fingers crossed) future.
There were 19 stalls from various groups and trade unions, with AK Press, Kebele Info Shop, Wessex Solidarity, and our three favorite national organizations (AFed, SolFed and IWW) giving the fair a nice anarchist presence!  Throughout the day there were some excellent talks, including Nigel Costley on the rebellious history of west country and a great talk from local historian Mark Sutton on the 1919 Swindon Peace Day riots, in which impoverished ex servicemen burned down a flag pole erected in their honour and used it as a battering ram to loot the food and supplies they and their familes so badly needed! Towards the end of the day, someone suggested we take the opportunity to show our solidarity with Pavlos Fyssas (a Greek anti-fascist musician stabbed to death by the neo-nazi Golden dawn), and quite a few folks took them up on the idea, hastily making some placards and gathering for a photo. There was also a whip-round, raising over £70 for his family. It was hard to judge numbers of attendees, but the hall was constantly buzzing and between 150-200 is a fair guess. After the bookfair was packed up there was a chance to unwind over a pint listening to some acoustic tunes from the excellent Efa Supertramp, Bandit the Panther and Swindon’s own Kitchen Sink Dramas at the official after party. As one of Swindon Anarchists put it ‘Great bookfair, beat the City bastards and off to the pub. Doesn’t get much better!’ (a disgracefully high percentage of SolFed members at the fair, including one of the event organizers snuck out to catch the game – so much for revolutionary discipline!).  Luckily the only football fan amongst the sizable Bristol contingent was a Rovers fan so things stayed calm!. If you’re from the area and feel like getting involved, there are SolFed members in the area, who can be contacted through the Bristol SolFed contact page.
A massive thanks needs to go out to all the stallholders and speakers who helped make the day a success, especially anarchist and syndicalist friends, including Bristol Anarchist Federation, the IWW, Wessex Solidarity, AK press and Kebele infoshop.
It was inspiring to see an event such as this happen in the town, and planning for next year’s event is already underway. Nice one Swindon!

This article was published on 29 September 2013 by the SolFed group in Bristol. Other recent articles: