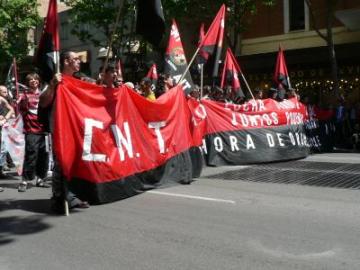 This year Bristol SF are participating in two workshops.

At 1.00pm, in Marquee Z, we will introduce "State Repression in Spain". This talk will be hosted by a Spanish comrade. Below is an short introductory text to set the background of this talk.

During the last four years Spanish society has witnessed a period of intense social protests against austerity, corruption, evictions, unemployment and so on. The greater and more radicalised the protest the bigger the state repression. The intensification of demonstrations and actions has resulted in an escalation of detentions and absurd fines. Every form of protest is now a new article in the criminal code.

Capitalists, the media and the state are all afraid of a radicalisation of actions outside the boundaries of democratic institutions.  Since the general strike in September 2010, a common trend of the repression strategy is been a kind of ‘laissez faire’ in the streets but followed by 'selective' detentions months later. Police have been literally knocking down doors of those who continuously take part in different actions and demonstrations. Consequently dozens of anarchists (but not only) have been arrested. At the moment, more than fifty people around Spain are waiting for a sentence that could take them to prison, and many others have been sentenced to pay high fines.

We are arrested because we point at the guilty of the drama; of so many lives embedded in misery; layoffs due to the cuts; suicides due to evictions; etc. We know this is a political strategy, a farce to scare those who choose to stand up and take action against those responsible for such precariousness. But we reaffirm our ideals and practice after proving that direct action and the creation of alternatives of life bothers them, a lot. Because of this, and because we are aware of the power we can have when we are organized, we don´t want to bow down to their intimidation and we call for a spread of solidarity for all the ones who suffer daily repression and violence within this economic system, in its myriad forms.

At 2.30pm, in the Assembly Room, we will join a panel discussion on "Solidarity". Others on the panel include Bristol Solidarity Network, Acorn Bristol, IWW Bristol. Bristol AFed and Bristol Refugee Rights.

It may be half of our name but what does "Solidarity" mean to us, how do we express it, when do show it and how does it give a vital strength to our internationalism. We intend to show how the message of Anarcho-Syndicalism builds Solidarity.

This article was published on 20 April 2014 by the SolFed group in Bristol. Other recent articles: