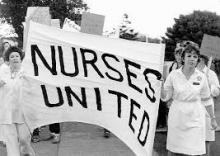 This year's Bristol Anarchist Bookfair is looking at "Building an anarchist future". As part of this dialogue Bristol SF will be hosting a workshop on:

Healthcare Beyond the State. For a people's NHS

What can we learn from recent NHS struggles that could help shape a health service based not on some golden age that never was but instead on the principles of direct democracy and mutual aid? How can we provide progressive healthcare without the bureaucrats and the bosses?

Here is how Bookfair Collective hope that the workshops and meetings with develop the theme of "Building an anarchist future". 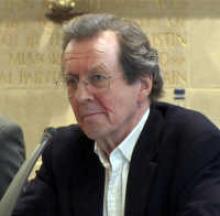 George Ferguson, the elected Mayor of Bristol, is directly responsible for cuts to services in this city - including services for children. He has halved the number of beds at the Bush, a residential centre for disabled children. [1] Even though the council voted to preserve funding - he pushed it through personally. This month the Hawkspring, a vital service that helps families affected by drug addiction, almost closed after having its funding from the council slashed. It only stayed open thanks to a charity stepping in to help at the last minute. [2] This is all while having plenty of money for other things - like massive pay-rises for council bosses [3], and £2.3 million a year on public relations and marketing. [4] 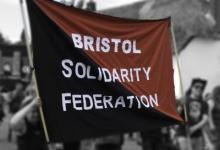 As a Bristol SF member recently arrived at a UK airport he was not expecting to be approached by plain clothed police and invited to have a little chat. This blatant attempt to harass and intimidate one of our members swiftly ended as the SF member, after realising they were not going to detain him, attempted to record the conversation and chased them off.

Bristol SF have a clear message for the police. We are about working-class solidarity, internationalism and freedom. Your creed is suspicion and paranoia. Your role is to protect privilege and crush dissent. We will never talk to you. 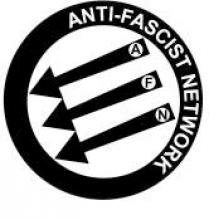 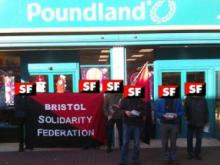 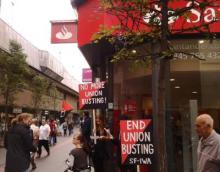 SolFed have been out in force in response to a sacked union organiser from our sister union in Spain, the CNT. Pickets were held in Brighton, Bristol, Newcastle and Middlesborough (see below). Santander have outsourced thousands of jobs in Spain, making it easier to control employees working in oppressive conditions - union organisers are targetted by the notoriously crooked family cartel run bank.

All pickets were well received, Santander having an already shoddy reputation in Britain, it was no suprise to those asking what the row was about to find that the bank is targetting union activists.

Newcastle SolFed were joined in Middlesborough by Teeside Solidarity Movement whose members eventually swelled the picket to envelope the bank and show the power of international solidarity. 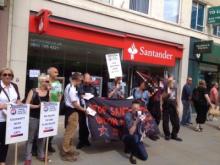 The blockade has been called off due to payment being made in full. Great result. 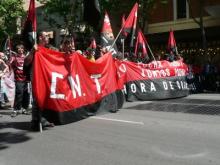 This year Bristol SF are participating in two workshops.

At 1.00pm, in Marquee Z, we will introduce "State Repression in Spain". This talk will be hosted by a Spanish comrade. Below is an short introductory text to set the background of this talk.

During the last four years Spanish society has witnessed a period of intense social protests against austerity, corruption, evictions, unemployment and so on. The greater and more radicalised the protest the bigger the state repression. The intensification of demonstrations and actions has resulted in an escalation of detentions and absurd fines. Every form of protest is now a new article in the criminal code.

Solidarity With The Arrested Comrades For Fighting In Spain.
Against The Reform Of The New Law Of "Public Safety"

Members of Bristol Solidarity Federation answered a call-out for solidarity and showed their opposition to the recent arrest of Spanish Anti-fascists and and the introduction of punitive anti-protest laws.

Below is the text of the leaflet produced by Spaniards living in Bristol.