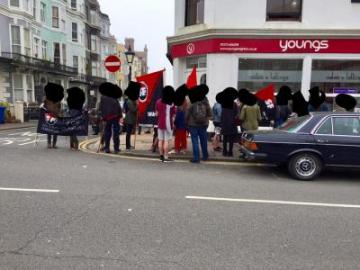 People might remember that we have been supporting Patrick for over a year now, as he was demanding compensation for the longstanding dramatic state of dilapidation of his flat and for the repair work that his landlord's and Youngs' consistent negligence forced him to carry out by himself, as well as, and most important still, for the outstanding repair work to be completed swiftly and at an industry standard (more info here). In response to the campaign, both Patrick and other SolFed members have been violently harassed by Youngs and their associates (link 1, link 2), and Patrick has been served an eviction notice in January, which was successfully rejected in court. This has not discouraged the landlord, however, who has been completely unwilling to initiate any form of dialogue with Patrick or us and has served a second eviction order in August.

As a form of immediate and concrete solidarity, we have raised over £400 for Patrick via an online fundraiser (link 3 - thank you to everyone who donated), in order to help him cover legal expenses and potential costs of moving to a new home and everything that that might come with. Meanwhile, we have helped Patrick with requesting for an Environmental Health Inspection to be carried out by Brighton and Hove Council. Somewhat unsurprisingly, this has been far from a smooth process, given that we have had to chase the council several times before they eventually decided to do their job, after a number of empty promises. The inspection resulted in an Enforcement Notice being sent by the council to the landlord, instructing him to carry out the repair work. This acknowledges and vindicates the claim Patrick and ourselves have been making over the past year about the hazardous condition of the property. As per the notice, a schedule of the enforced work was supposed to be sent to Patrick by the 6th November. Yet, staying true to their attitude, both the landlord and Youngs are ignoring the notice, even pretending that this has not been issued at all. The landlord has instead served a new possession order, trying to force through the eviction while dodging his duties once again.

In response to yet another display of arrogance from this rogue landlord and his gang of bullies, Patrick is still determined to put up a fight, for which we will continue to support him however we can. Now as always, an injury to one is an injury to all!

This article was published on 25 November 2018 by the SolFed group in Brighton. Other recent articles: