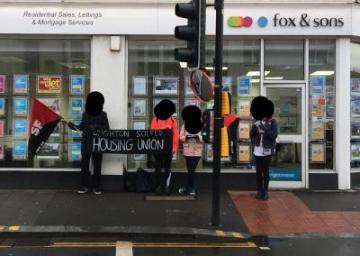 As our public campaign against Fox & Sons continues, and as they continue to refuse to compensate the six tenants they left homeless due to persistent failures of communication and procedure, we have been contacted by another tenant describing their experience of attempting to rent through the agency.

The tenant (who has asked to remain anonymous) became aware of our dispute with Fox & Sons, and shared their story in order to show that the issues faced by the six tenants organising with Brighton Solidarity Federation are not isolated but instead suggest a consistent pattern of neglect and failure on the part of the agency.

In July 2018, they paid a £690 holding fee to Fox & Sons. A move-in date in October was agreed, and the tenant along with their co-tenants completed referencing checks, prepared for their move by registering for payment of council tax and various amenities, and signed a six-month tenancy agreement. Six days before the tenancy was supposed to start, the tenant was contacted by a Fox & Sons employee who said that the house would probably not be available by the agreed move-in date, because the current occupier’s new tenancy had fallen through.

Concerned, the new tenants responded to this news by email, saying: “I hope you can take into consideration that 4 people now have nowhere to live, starting jobs in a city 100 miles away from where we currently live and know. We’re really concerned and would like to talk to you about a solution.”

Fox & Sons responded and said they remained unsure about whether or not the house would be available by the move-in date. They also offered to show the new tenants around a different property. The tenants agreed to this and asked the employee to bring a copy of the contract signed earlier in the year.

One day before the tenancy was supposed to start, the tenants were shown around a new property, which was visibly unsuitable for housing four people. The employee who showed them around this property hadn’t brought a copy of the contract as requested. Following this debacle, the tenants insisted they go to the Fox & Sons office, where they met with the nonchalant and unhelpful attitude that appears to characterise the agency’s relationship with tenants and prospective tenants. After dealing with a barrage of contradictory and unsympathetic information, the tenants managed to arrange a new move-in date, six days later than the original one. Later that day, Fox & Sons contacted them to say the landlord had offered a small reduction of the first month’s rent as a good-will gesture.

Summing up this desperate failure on the part of the agency, the tenant said: “We believe we have been lied to throughout this whole process and that Fox & Sons have completely disregarded the effects on us in the hope they can simply continue to secure income and profit for themselves and landlords.”

Certainly, this is the impression given by our dealings with them over the last few months. The experience described to us here shows that disregard for the precarious position of tenants, and persistent miscommunication with tenants, is part of how Fox & Sons operates.

Our public campaign against them continues, and our demand remains that Fox & Sons compensate each tenant £380 for leaving them with nowhere to stay, a sum that should help the tenants to cover the difference in rent they were forced to pay when finding a property at short notice after the cancellation of their planned tenancy.

This article was published on 2 February 2019 by the SolFed group in Brighton. Other recent articles: