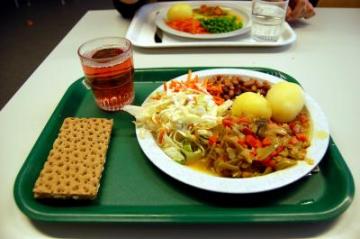 A dinner lady came to Brighton SolFed when there was nowhere left to go.

At the time, they faced a disciplinary hearing for gross misconduct in three days. They had not been paying union membership dues, so they were refused mainstream union representation.

The individual was working for an outsourced catering company at a primary school. An accident occurred in the work place, where a potential allergen was served to a pupil, thankfully with no adverse outcomes. Although the individual was not at fault for serving the pupil, she was nonetheless held responsible. Having worked there for over five years, this uncertainty was unnerving for them.

They were desperate in this seemingly helpless situation.

After going over the events and procedures with the worker – bearing in mind the investigation had taken place and it was the final hearing in three days – we came up with a plan: Provide the company with a statement from the worker outlining their case, and ask to have SolFed representation at the discipline hearing to support the worker. This was granted.

The morning of the hearing, the worker was understandably nervous. We reminded them of our plan for the meeting, went over their statement, and reassured them that we were there to support them.

The meeting commenced. Straight away there was uncertainty about SolFed's presence, as we were not an official union, and as our member was not a work colleague, so technically they could have refused our attendance. Thankfully they allowed our presence, though they asked for no contributions.

The interviewer would ask multiple quick fire questions in succession, to which the worker would offer replies that tried to encompass all the points. As English was not their first language it was difficult. The interviewer would then turn to the minute-taker and state that the worker did not even understand and was unable to answer the questions. Instead of trying to get clarity, they simply moved onto the next set of accusations and questions. As the meeting started to come to a close, the worker stuck to the plan and presented their statement, which had also been sent to the company. The interviewer remarked that they had never seen it, to which the minute taker exclaimed it should be in the pack. Surprisingly it was not there, so they needed time to look it over.

In this break we regrouped, reassured and planned the next step. We clarified the points they had asked and outlined it clearly; the worker knew exactly what they needed to discuss.

After resuming the meeting the worker clearly explained the points missed earlier. Then the decision came from the interviewer: from seeing the new evidence in the statement and points raised in the meeting, they said were unable to decide there and then and would have to get back to the worker. With these uncertain words the worker broke down into tears. The awkward company representatives wanted the worker to quickly sign the minutes and leave, but our member interjected and made sure we were left alone and given time to read them over once we were ready.

With no idea of the result, the worker was anxious but felt supported, and was thankful for our support. Within three days the worker received a letter confirming they had not lost their job and that they could resume work with a written warning. Result!

Although as a local we did not need to do much, we supported the worker and showed them true solidarity, standing together and looking out for each other. This is raising class-consciousness, where it is workers supporting workers, which is not dependant on money or dues. While mainstream unions see their role in representing their members, delivering support only in return for membership fees, our approach is to organise as workers in solidarity with other workers supporting non-members where we can - because it is through solidarity that the working class can empower ourselves. The worker is unfortunately unable to help the local day to day but firmly supports us and said they would help us with future call outs.

This article was published on 27 February 2017 by the SolFed group in Brighton. Other recent articles: