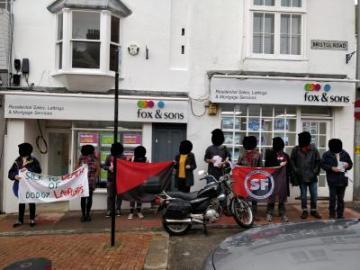 We have concluded our dispute with Fox & Sons after a second landlord quit the agency following a short direct action campaign against their business. This follows another landlord who quit the agency in February after a similar campaign. Our campaign against Fox & Sons has been ongoing for four and a half months, and the loss of these landlords – from whom Fox & Sons would have taken 16% of the rent for a full management service, on top of all the fees they charge – coupled to the damage to their business caused by the campaign, is likely to have cost them thousands of pounds.

Our campaign against Fox & Sons in Kemptown began in November, after we were approached by a group of tenants who wanted to organise for compensation after the agency cancelled their tenancy five days after they were supposed to move in. Ourselves and the tenants delivered a demand letter to Fox & Sons in early November, demanding £2280 in compensation, which was the difference in rent for the year on the new house the tenants had to rent with no notice after their tenancy was cancelled. The agency didn’t respond to the letter, so we began the public campaign with a well-attended picket one week later. This got their notice, as we received an email from the Area Manager the next day, who said he would be investigating the situation. We carried on our campaign regardless, since our demand was clear.

Unsurprisingly, the Area Manager’s investigation found no wrongdoing by the branch in question. In response to this, we escalated our campaign to the Western Road and Lewes Road branches of Fox & Sons. They responded to this with the familiar bullying tactics of bosses, calling the police to the pickets and trying to intimidate the tenants out of taking action.

Shortly after this, we contacted the landlord of the property in question directly, and discovered that he had paid £720 compensation to Fox & Sons that was intended for the tenants when he cancelled the tenancy, which they had failed to pass on. We informed the landlord of this – in response, instead of paying this money and the rest of the compensation we were demanding to the tenants, Fox & Sons simply returned the £720 to the landlord. Clearly, they were concerned about the prospect of losing his business.

We escalated our campaign to a national level, with SolFed locals in Manchester, Liverpool, Bristol, Eastbourne, and London all staging pickets outside of Fox & Sons' sister agencies. Fox & Sons responded by getting the company that owns them – Connells – to investigate the complaint, who again unsurprisingly found no wrongdoing. We responded to this by escalating our dispute to Skipton Building Society, which owns the company that owns Fox & Sons, with pickets of Skipton in Manchester, Bristol, and Croydon, as well as solidarity pickets by our comrades in Surrey, Cut The Rent and the IWW in Dorset.

At this point, we also staged two further escalations: we delivered a demand letter to a landlord who rented a property out through Fox & Sons who also owned a business in the laines, and our sister section in Australia, the Anarcho-Syndicalist Federation (ASF) began pickets of an IT business owned by Skipton in Melbourne. After a single, fiery picket of the business of the landlord in the laines, she quit the agency, with a scan of their website and a phone call to them confirming that her property was no longer available to let. We then escalated further by delivering a demand letter to another landlord renting out her property through Fox & Sons, who is also the director of a recruitment firm. The landlord quit the agency after a single phone picket.

Whilst this will have been costly for Fox & Sons, it’s disappointing that these actions have not led to the agency paying compensation to the tenants organising with us. A total increased rent of £2280 for the year is a lot of money when you have very little of it, and it would have been really useful for these tenants if our organising with them had meant that they got this compensation.

Nonetheless, at this point, when our actions have cost Fox & Sons more than we are asking for in compensation, it seems as though they are willing to take the loss. This could be for a number of reasons, such as that they’re a business with multimillion pound profits that can likely absorb these kinds of losses, as well as – and this is perhaps the main one – the fear of setting a precedent that they pay compensation every time they cancel someone’s tenancy at the last minute. On email and on the picket lines, we have heard from a number of other Fox & Sons tenants with stories similar to this one: if Fox & Sons were to pay out, they may well create a situation that would cost them a lot of money in the long run.

With all this in mind, the tenants and ourselves have decided to conclude the dispute. There’s been lots of positives from the campaign: the amazing solidarity from other locals, from Surrey, Cut The Rent, from the IWW, and from the ASF, showing that tenants across the country – and the world – will stick up for one another; the people passing the picket line who have seen that it is possible to stand up to the bullying landlords and lettings agencies; and the economic damage that has been done to Fox & Sons’ business.

And, if anyone from Fox & Sons is reading this and thinking that the landlords who quit their agency can now return to it: we have our eye on your listings and will be back outside those businesses if those properties show up again.

This article was published on 11 March 2019 by the SolFed group in Brighton. Other recent articles: