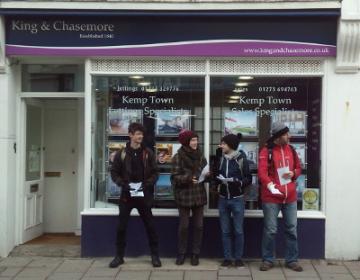 A lettings agency is facing a growing campaign by an aggrieved tenant supported by Brighton Solfed after refusing to pay back a holding deposit. King & Chasemore Lettings botched up a prospective tenant's attempt to rent a flat off them – and then exacerbated the situation by keeping part of her holding deposit. This Saturday saw strengthened protests organised by Brighton Solfed.

Previously we held two pickets outside the Norfolk Sq branch as this is the branch where the deposit theft occurred. Since these protests were not enough to convince King & Chasemore to change their stance, Saturday 28. November saw us picket a two branches - one picket of Norfolk Sq branch, and a second one outside the Kemptown branch. Solfed members backed the tenant and her friends by handing out hundreds of leaflets and talking to a large number of passersby. The aggrieved tenant commented:  "I feel very comforted that the public expressed their support of the cause, and I'm also glad that I'm surrounded by the positive energy of the Solfed team."

Solfed members and supporters discussed the dispute with numerous passersby, who were overwhelmingly favourable towards our campaign. Many congratulated the tenant for taking action rather than letting it pass. A lot of people talked of their own negative experiences with lettings agencies. One passerby, on hearing what had happened, decided to go into the lettings agency and give them a piece of her mind.

The manager of the branch seemed none too pleased about having to work on a Saturday only to find himself dealing with protesters. In fact he later called the police – who turned up, took a leaflet, and assured everyone the picket was fine as long as the entrance was not obstructed.

We also talked to a tenant renting a flat from King & Chasmore commented that "they are shocking'. A viewing had been arranged by King & Chasemore but the lettings agent failed to turn up on time for the viewing and didn't respond to the customers phone calls. When they eventually turned up late they didn't have keys to the flat, resulting in the cancellation of the viewing, wasted time, and wasted travel costs. King & Chasemore refused to apologise or refund the significant travel costs from London.

Brighton & Hove suffers from a housing shortage, which results in a preponderance of practices that favour landlords and agencies to the detriment of tenants. A recent BBC investigation found hundreds of cases in which agencies ripped off tenants by making them pay a holding deposit, not letting them move in and then keeping the money. Holding deposits are designed to reserve a property until references have been checked and a contract , but since they aren't legally binding, they don't prevent agencies from changing the advertised terms of a tenancy, such as moving in date or rent. For example, they don't necessarily prevent gazumping - the practice of unexpectedly raising the rent over the agreed amount, at the time a contract is to be signed. While holding deposits are becoming more common in England, they are deemed illegal in Scotland. Unlike tenancy deposits which are protected under government-backed schemes, there is hardly any regulation of holding deposits in England.

The tenant supported by Brighton Solfed had her whole deposit withheld after the letting agency unilaterally terminated the “good-faith” agreement, on the basis of an unfounded and prejudiced accusation. After the tenant's initial protestations, the agency conceded to return only half the deposit - a clear recognition of their mistake while simultaneously trying to make the tenant (who was out of money) drop the case.

The aggrieved tenant is demanding that her holding deposit is reimbursed in full (£325 are outstanding), as well as £100 for costs incurred to her. The tenant also demanded an apology for the treatment she suffered - she was treated in a demeaning manner and was distressed by the unexpected and unjustified loss of her prospective home. King & Chasemore have made a partial apology, which has been welcomed.

Brighton Solfed has supported the tenant in trying to find an amicable solution to this dispute. Yet King & Chasemore have channeled the tenants demands into a slow and technical internal complaints procedure that is only intended frustrate and dissuade the tenant. The finding of the internal complaints procedure was of course in favour of the agency, and King & Chasmore did not respond to further attempts to find an amicable solution. As a result of their refusal to resolve the dispute, Brighton Solfed and the tenant are now stepping up our campaign.

King & Chasemore Lettings are owned by Countrywide PLC, who operate over 400 lettings agency offices across the UK under 46 local high street brands.

This article was published on 1 December 2015 by the SolFed group in Brighton. Other recent articles: