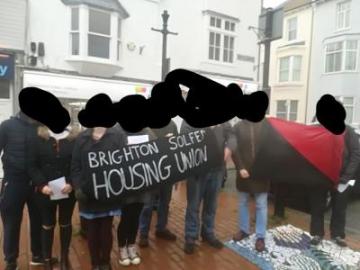 We recently opened a public dispute against multi-branch letting agency Fox & Sons, in support of a group of tenants who had their tenancy delayed and then completely withdrawn five days after the start of their agreed move-in date. As a result of this mismanagement by the agency, the tenants had to find a last minute alternative accommodation, which ended up being far above their budget. The tenants are now demanding that the agency pays them compensation to cover at least part of the additional costs that their new tenancy requires for an initial period. This would be a way for Fox & Sons to make up for the difficult financial situation that the tenants were forced into.

So far, Fox & Sons have refused to take responsibility for the issue, and outright rejected all claims for compensation. Consequently, the tenants in conjunction with Brighton SolFed have staged a number of informative pickets in front of the shop, in order to let people in the neighbourhood know about the way they have been treated. On Saturday 1st December we escalated our campaign by organising the third picket in as many weeks, with simultaneous presence in front of three different branches of Fox & Sons (two in Brighton & Hove and one in Eastbourne).

It is unsurprising to see another letting agency treating their customers like disposable pawns, valued only when money can be squeezed out of them. What is alarming in this case is Fox & Sons' repeated use of the police as a way of intimidating and harassing the tenants and other SolFed members. On our second picket, a van of police officers was called in response to a group of 8-10 people doing nothing other than peacefully handing out flyers and talking to passers-by. Last Saturday, the police were again called at two of the three branches that were being picketed and, in the case of the Kemptown branch, an officer was made to patrol the front of the shop for the entire duration of the picket. Not only do Fox & Sons seem comfortable deploying police force as if they were a private security company; their justification for doing so was that having one of us entering the shop simply to notify them that a picket was going to start was a form of intimidation on our part. Perhaps Fox & Sons ignore that peaceful protest is a completely legal practice – and handing out flyers can't possibly be described in any other way. As noted by a woman that was passing by, the agency must have 'a strange understanding of "intimidation" if they don't see that continually using the police as a means of preventing tenants from exercising their right to protest is itself a textbook example of intimidation'.

While we still hope that Fox & Sons will soon come to their senses and engage in a reasonable negotiation with the tenants, we will not be bullied by the agency's practices and will continue our campaign. In fact, we invite all members of the public to join us in standing up to the real intimidators by coming to the next picket of the Kemptown branch of Fox & Sons (9-10 Bristol Road, BN2 1AP) on Saturday 8th December at 12pm.

This article was published on 3 December 2018 by the SolFed group in Brighton. Other recent articles: