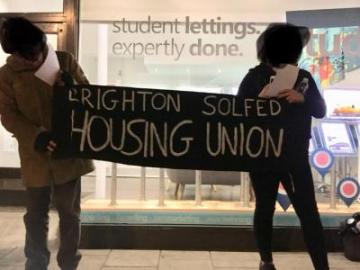 Brighton Solidarity Federation has started a dispute with Brand Vaughan, a large estate agency with branches in Hove, Kemptown and Preston Park. A tenant has been organising with SolFed after deposit deductions were made from their joint-tenancy deposit, despite the fact they left the property in a clean condition. The deductions were unreasonable, not costed in enough detail, on top of this, service from the agency was poor throughout her tenancy.

Along with the tenant, Brighton SolFed wrote to Brand Vaughan December 1st, explaining the issues and outlining options for redress. Brand Vaughan claimed the dispute was something they could not address, after they had opened up a TDS case without the tenant’s express permission. The tenant was wholly unsatisfied that months after the end of her tenancy, she had not been returned any of her deposit.

Due to the lack of response from the agency or the TDS in relation to the demands, Brighton SolFed has begun a public dispute with Brand Vaughan. This began with a picket outside the Hove branch at 5pm on Wednesday 17th January. Nearby staff and students of the British and Irish Modern Music Institute, passing the picket on their walk home, expressed concern about such treatment of students and tenants, and explained their own problems with agencies in the city. The frustration about agencies taking deposits is obvious to see, and there was great solidarity shown for the tenant’s campaign, including one passerby who went into the agency to make her dissaproval toward their practices clear.

With the support of Brighton SolFed, the tenant is demanding that the landlord return the £390.40 withheld from their deposit,  along with 10% of rent paid as compensation for distress and poor service (£541.67). She told Brand Vaughan they felt unsafe in the property, her communications were not adequately addressed, and sometimes they were ignored. Then unreasonable deposit deductions were made, and the agency tried to distance themselves from the problem. As the tenant explained:  'I am so disappointed with Brand Vaughan. I was locked in a joint tenancy agreement paying 8 months up front because of my lack of guarantor. They were unsympathetic to my safety concerns, When conflict endured they told me to not to go back to my house but to pay my rent.’

Brand Vaughan’s response to the reasonable demands for the full return of the deposit has been to make threats of legal action. On the streets, however, there is support for the tenant to challenge the practices of estate agents taking money from deposits. With direct action, we can understand that each of us has the same problems, and that we won’t accept being subject to obfuscatory procedures or having money taken from us unjustly.

This article was published on 23 January 2018 by the SolFed group in Brighton. Other recent articles: