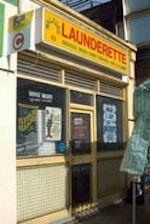 The dry cleaners, based in the Kemptown area, had been withholding holiday pay of over £1000 from a migrant worker. Despite the worker asking repeatedly for their owed money, the bosses ignored and demeaned them. The worker came to Brighton Solfed, and we started the process of demanding the owed holiday wages. The management tried their best to scam us too, claiming that you can’t accrue holiday pay during a probation period, and claiming compensation for damaged clothing. We explained to the boss that not only are they completely wrong about these things, they were also flagrantly flouting employment law by withholding holiday and demanding compensation. It was clear that the boss had not dealt with a strong, experienced, union before, and in the face of our opposition to his lies, he agreed to pay the worker what they were owed within the hour - the dispute was won before a single picket was carried out. In a nice coincidence, the boss crumbled on May 1st – International Workers Day. We were able to celebrate this quick display of organised working class power as we marched alongside others through Brighton, celebrating our day.

Disputes like this demonstrate just how rife extreme exploitation is for low waged workers, especially migrants. Bosses try this because they think they can get away with it, in the expectation that the worker has nowhere to turn and can’t do anything about it. Actions like this help serve as warning to bosses that this won’t stand. To make a world where employers can’t rip us off, we need to build a culture where we all stand up for ourselves collectively. We want to build towards a situation where actions like this happen all over the country – we don’t need representatives to make things better for us, we just need to stand up and stand together.

The worker and ourselves were delighted with this win - a simple show of solidarity and strength meant the worker has a much better summer ahead of them than they thought. After the campaign, we discussed events with the worker, and these are her thoughts:

"At first, I thought that involving Solfed in my case could be too aggressive, because my bosses created a very familiar relationship with me and I didn't want to harm them. When I left the company I tried to keep a good relationship with them, but it was not possible - I asked them for my holiday pay but I never had an answer.”

This is very common in small businesses. Bosses try to create a sense that they are friends with their workers. This means that workers who demand their rights are made to feel that they are betraying that friendship and the trust that is implied in it. Of course, it doesn't stop these so-called friends from sponging off their employees.

“I felt disadvantaged because of my condition as a foreign national and they tried to benefit from that.

Then I thought that I didn't leave my country to lose my work rights, so I decided to contact Solfed. They gave me the solidarity, confidence, and the strength that I needed to face this situation.

I felt cheated and sad because I knew I was not getting a fair deal. I knew that my bosses were taking advantage of my situation as a migrant and foreigner and because I didn't speak English "properly".

When I started, nobody told me about my conditions in the company, so I didn't know if I had a contract either. I was afraid to ask about my work situation because I thought they were giving me a great opportunity. I felt smaller and more insecure every day.

The working class should have many small victories and I think this has been one of them. I feel that I have gained confidence in social movements and in myself to defend my labour rights.

My bosses have received a notice and they will probably try and continue doing the same and taking advantage of the weakest, but now they know there are unions that can push for them to comply with the law when they are not willing to do it."

This article was published on 27 May 2018 by the SolFed group in Brighton. Other recent articles: