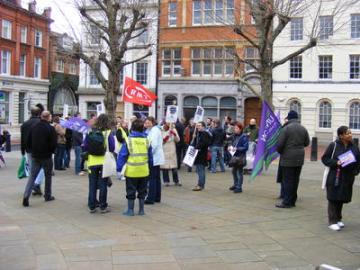 Reading now has a number of campaigning groups in opposition to the cuts and the coalition government which has opened up the way to make the case for opposition to all the political parties. The Labour councillor, after all, could offer little more than ask us to vote for Labour in the next local elections, acknowledging that the Labour Government’s had missed a ‘trick or two’ after the 1997 election... The various campaigns will succeed or fail to the extent that they can reach out to and mobilise people beyond those already active. In Reading there are grounds for optimism that this might be building.

This article was published on 16 January 2011 by the SolFed group in Thames Valley. Other recent articles: