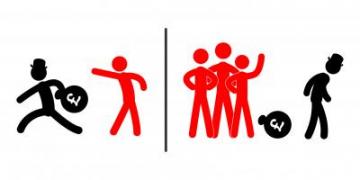 Three groups of tenants organising with Brighton Solidarity Federation Housing Union over the past three months have each secured victories in their disputes. Working with our Housing Union, these tenants used the everyday tactics of solidarity and mutual support to take direct action – to win back stolen cash and to improve their conditions.

The first dispute was a group of tenants whose landlord and lettings agencies had left them living in damp, infested accommodation for a year. The landlord switched agencies half way through the tenancy, though both failed to address the problems in the house. After a direct action campaign, the landlord and the two agencies paid out £3900 in relation to the damp issue. Together with the tenancy deposit the campaign had demanded to be returned in full, the six tenants received just over £6000 as a result of the campaign.

The second dispute was a tenant who had £510 withheld from her deposit for cleaning and maintenance charges. The tenant had the house professionally cleaned before she left, and had evidence that she had not caused the damaged alleged. The letting agency refunded the withheld amount after a direct action campaign.

The third dispute was a tenant whose landlord left him without a working cooker for a year and a half. The tenant and Brighton SolFed wrote to the landlord about this, and he installed a new, gas safety certified cooker after the threat of a campaign.

We’re really pleased about the compensation, refunded deposits, and improved conditions that these tenants have won. We’re also really excited that tenants are taking the solidarity that so many of us undertake every day – helping friends with their housing situation, supporting one another to stand up for ourselves against the bullying landlords and agencies – and fighting back against the poor living conditions, extortionate rent and fees, and neglect that will be familiar to so many people living in Brighton and beyond. Through direct action and solidarity, we have the power to improve our lives!

We’ll have full write ups of these disputes soon – for now, if you’re having trouble with your landlord or letting agency, you can get in touch with us by emailing housing@brightonsolfed.org.uk, or by texting 07427239960.

This article was published on 10 November 2017 by the SolFed group in Brighton. Other recent articles: