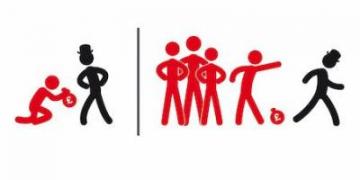 Two years into the Brighton Solidarity Federation Housing Union, we've had another busy year of working collectively to push back against the city's continuing housing crisis. In this article, we look back on actions and initiatives from the last 12 months and consider our attempts to maintain the momentum of 2017-18 by adopting different strategies and taking on different cases.

Brighton SolFed started a housing campaign in June 2017, a little over two years ago, in the hope of developing a group of people keen to challenge the poor conditions and high cost of rental property in the city, as well as the dodgy practices of landlords and letting agencies. The problems with rental property have continued to mount up; rental prices have increased 30 per cent since 2011, and the exploitation of renters continues to be a profitable practice for agencies and the property owners that hide behind them.

Following on from the successes we had recouping stolen deposits and fighting poor quality accommodation in 2017-18, here are the cases we took on in 2018-19 and some reflections on the development of our strategies and approaches over the last two years.

What we've done this year

Our actions this year have continued to be focused on deposit theft and compensation for poor living conditions. These campaigns have resulted in a number of successes:

Reflections and changes in strategy

The biggest change in our approach since we started in 2017 has been a move towards supplementing direct action with other ways of fighting back against letting agents and landlords. Particularly with agencies like G4Lets, who have built a whole business model around exploiting and stealing from tenants, there's a limit to what damage can be done to their reputation. They have one office in an isolated part of town, and they deliberately advertise their properties on aggregator sites so that students can often end up renting from them without realising who they are until it's too late. Additionally, drawn-out direct action disputes can be challenging to undertake for some tenants who do not have the spare time to  do so.

With that in mind, we focused more on challenging agencies through letters, and through the DPS. Agencies often operate on the premise that they can make unwarranted deductions that tenants will be too busy or too intimidated to challenge; this means that sometimes just sending a firmly-worded and legally-informed letter is sufficient to make them row back on attempts to steal from tenants' deposits. We have been providing tenants with template letters to facilitate this.

In terms of the DPS, while there are obvious limitations to this process – it takes a long time, sometimes three or four months; it is inherently weighted in favour of property owners; it is a complex and annoying system to get to grips with; it requires a level of evidence and paperwork from tenants – we've found that collectivising the effort required to go through it, and sharing our knowledge about how to do so, helps to mitigate some of these problems. For agencies that are inherently resistant to direct action because their reputation is already in the gutter (like G4), we found that it makes sense to go down this route, particularly because another tendency of these kinds of agencies is that they often cut corners and fail to fulfill legal obligations, meaning tenants have a good chance of winning their case with the protection schemes.

Finally, we've also tried to move in a different direction through the G4 rent strike, by bringing groups of tenants together to challenge the agency through direct action that doesn't involve picketing or other actions. Again, this is a case of collectively giving each other the knowledge and confidence required to stop agencies from taking advantage of us.

This doesn't mean that direct action doesn't still have an important role in settling disputes, holding agencies and landlords to account, and making their actions visible. But what we want to work towards is an extensive and flexible set of possibilities that can empower groups of tenants to challenge all the ways that landlords and agencies take advantage of them. Sharing information, putting people in touch with each other and showing that the flimsy excuses of agencies often crumple when challenged, has helped us to do that over the last 12 months, and we intend to continue doing so into 2020 as the rental market in Brighton continues to take its toll on tenants financially and emotionally. Working together, we can make our lives more liveable and stop landlords and letting agents from getting away with it.

If you're having trouble with your letting agency or landlord, or if you just want to get involved, you can get in touch with us at:

This article was published on 28 July 2019 by the SolFed group in Brighton. Other recent articles: