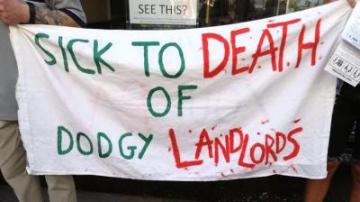 Just over a year ago, Brighton Solidarity Federation started a Housing Union. Our experience living in Brighton was of rents rocketing up (18% average in 2015 compared to 4.9% nationwide), while conditions were getting worse. We wanted to find ways to stand up for ourselves and fight back. In this article, we look at the successes we've had, the lessons we've learned, and the knowledge we've acquired over this first year.

Why we started Brighton SolFed Housing Union
In June 2017, Brighton Solidarity Federation started a campaign focused on housing. Our experience living in Brighton was of rents rocketing up (18% average in 2015 compared to 4.9% nationwide), while conditions were getting worse. Huge increases in student numbers led to ever more scumbag landlords and letting agencies shoving more and more people in ever smaller spaces, and becoming increasingly brazen in withholding deposits. Brighton and Hove is a city with an incredibly transitory population, and this - combined with letting agents’ belief that because Brighton is somewhere people particularly want to live, people will put up with anything - makes it ripe for the worst kinds of exploitation of renters.

We immediately knew that we wanted to focus on our direct action approach, rather than a legalistic model. While we made sure to inform tenants of the possibilities of going this way and signposting where appropriate - for example in cases of deposit theft using the Deposit Protection Scheme (DPS) – we were clear to explain why we don't pursue these cases in this way. For example with the DPS, landlords and agencies have three different protection schemes to choose from, so it would not be in their interests to consistently rule in favour of tenants. Moreover, agencies have staff dedicated to undertaking such administration, who have knowledge and experience of the regulations, meaning that the deck is stacked in their favour even when an agency is blatantly in the wrong.

We also think that direct action public campaigns help to highlight that many of us share these problems, and that our power lies in banding together to fight them. DPS procedures keep these problems private and help agencies to guard against the formation of solidarity and support amongst their tenants.

What we’ve done this year
Over the past year, we have primarily organised with tenants to campaign against deductions to their deposit and poor quality accommodation. These direct action campaigns have resulted in a number of victories, including:

We’ve been really encouraged by the number of tenants organising with us to successfully fight deposit theft, as well as those who have organised with us to fight poor quality accommodation.

Over the past year, we have also organised with a tenant who was evicted at short notice from their sub-let, as well as with tenants facing deposit deductions by one of the most notorious student lettings agencies in the city, G4Lets. Whilst that campaign did not result in a pay-out for those students, it has encouragingly seen further G4Lets tenants approaching us and successfully making demands, such as for the return of holding deposits, as well as exercising their rights with regard to disrepair issues. You can read our reflections on our six-month long dispute with G4Lets here.

The other dispute that we have been organising for the past year has been in support of a tenant, Patrick, who lives in accommodation that was allowed to deteriorate into serious disrepair by his landlord and the landlord’s managing agency, Youngs. In December 2017, we supported Patrick to demand that vital repair works were carried out, and that he be compensated for having to live in such run-down accommodation for a considerable period of time. In January 2018, his landlord served him with an eviction notice.

Our nine-month dispute with Youngs has included pickets, marches through Kemptown with dozens of other tenants demanding the repairs and money Patrick is owed, and the extension of our campaign to another letting agency in the city, Halls, who are the landlord of Youngs’ office. We demanded that Halls evict Youngs from their office.

Our dispute with Youngs has shown the real face of landlords and lettings agencies across Brighton and beyond. On one picket, a Brighton SolFed member was assaulted by the owner of Youngs, and Patrick was assaulted in his home by the son of the owner of Youngs, Oliver Pay, in response to our demonstrations. Youngs have clearly been rattled by the power of self-organised tenants supporting one another to stand up for themselves.

Patrick successfully resisted the first eviction in court in June. Now, the landlord is trying again, this time backed up by a law firm, Dean Wilson. Patrick will be fighting the eviction in court again, whilst we are raising money for if he has to move. You can donate to Patrick’s moving fund here: https://www.gofundme.com/patricks-housing-fund.

What’s next
After a year of fighting deposit theft and poor living conditions, we have picked up some useful pieces of information, particularly about how to challenge deposit deductions and how to get repair works done. We’ll be putting all that information into an expanded Housing Union section of our website. The deposit theft, disrepair, and damp and mould sections will have information about and template letters for challenging these problems. The Housing Union section will also have information about and template letters for challenging: agency fees, Right to Rent, and eviction, as well as advice on dealing with harassment, and rent increases.

The seemingly constant pressure that comes with poor quality accommodation, with the ever-present threat of having to move because of a rent increase, with the possibility of losing money from your deposit, with harassment, and with being taken advantage of by a group of people who only see you as someone from whom money can be extracted, is really stressful. Fighting back this past year has not always been easy. However, it has really helped us to see that it is possible to stand up for ourselves – we can get our deposits back, get our flats fixed, and fight eviction notices, especially when we support one another to do so and fight on our own terms.

We’ve been really inspired by all of the tenants who have organised with us this past year. They’ve helped build our confidence that direct action, solidarity, and mutual aid can ‘change the crappy way things have been for too long’, as one tenant we organised with put it. We’re looking forward to another year of tenants supporting one another to make our homes safer and our lives more liveable.

If you’re having trouble with your letting agency or landlord, or if you just want to get involved, you can get in touch with us at:

This article was published on 5 September 2018 by the SolFed group in Brighton. Other recent articles: