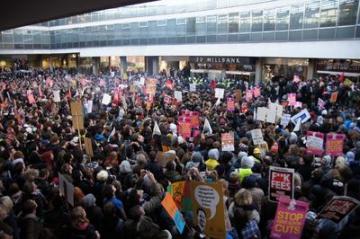 A campaign of demonisation has started against the students who trashed Tory HQ on Wednesday, who are being portrayed as unthinking thugs. We re-publish here an article about what happened at Millbank by one of the participants.

Yesterday was glorious. It was inspiring, fun and yes, ‘anarchic.’ I spent most of it laughing and hollering into the brisk air on those sunlit streets. Scary, huh? The news reports seemed to think it was very serious. That may have been because of the seriousness of the cause for which the demonstration was organised, and indeed the violence of the attack on education by the politicians, directors of institutions and the rest, is far greater than anything demonstrators could have dreamed of doing, even the absolute plank who chucked a fire extinguisher from the roof.

Larger demonstrations have at least 3 important functions- inspiring the local campaign work, adding courage and perhaps leverage to the national campaigns by raising their profile, and creating a semi-autonomous space which is a sort of ‘practise’ for a revolutionary situation where people discuss, learn, show their creativity and put their beliefs into action. As such, tactics should be weighed up with these in mind.

It just so happens that on Tuesday I had been reading an article on such tactics as those used at Millbank, only regarding the Toronto G20 demonstrations (http://www.walrusmagazine.com/articles/2010.12-essay-the-question-remain...). Much of the article is precisely about ‘the limits of protest,’ and pointed out that discussion of the demonstrations was shut down in what we might call ‘mainstream discourse’ because of the tactics used. I’m not interested in the ‘intrinsic morality’ of property destruction.

My only sympathy is with the invariably low-waged sods that have to clean up. A part of me says that it is not our fault if people use their own deluded sensibilities as an excuse to ignore the issues, and that we shouldn’t pander to such sensibilities. Another says that like it or not, this is a consequence and could be marked up as a downside of such tactics. However, I suspect it simply vindicates those who disagree with our position anyway, and does raise the profile of the cause, nay the movement, in a way that the march and rally alone wouldn’t. Whatever your opinion of it as a whole, in the popular recollection of the British suffrage movement, whose tactics were best remembered and are probably the most inspiring? I’d suggest it was the WSPU, and so I’ll throw it out there that property damage is a valid way to grab public attention. And let’s remember that mainstream media and majority opinion, however linked, are not equal.

The media reaction would be disappointing if it weren’t so predictable. Jeremy Paxman’s attempt at character assassination of Clare Solomon on Newsnight was pathetic for example, but pretty standard. It was, after all just ‘a bunch of rowdy anarchists and other troublemakers, not ‘real’ students.’ The implication that only students currently in formal education, and within that perhaps only HE students, have the right to be there is in itself preposterous of course. The cuts are an assault on us all: lower management, families, school students, teachers, lecturers and practically everyone else in between. Even the bankers are affected, although they probably don’t lose sleep over such long-term repercussions. And more than that the cuts are, in fact, an assault on thought itself.

A more rooted problem in much of the mainstream coverage, perhaps, is the caricature of a student as a twenty-something consumer of Heinz products. This isn’t an accurate reflection of students. It also couldn’t be further from the general concept of each and every individual in society being a student – I know I never want to stop learning, and that concept is something I firmly believe in as a principle of action and organisation. And for the record, if we are to make such concrete distinctions, there was a greater proportion of those ‘ordinary students’ than ‘troublemakers’ in and around that building.

Finally, on the demonstrators’ side of things, I’d say a large number of the people there, and yes there were thousands at Millbank Tower (don’t take my word for it, check the Daily Mail), had never been on a demonstration before. Was it educational for them? Yes. Did it radicalise some people? Yes. Did we descend with some of the fire in our bellies that the French and Greeks are famous for? Yes. Would I say it was a positive experience overall? Certainly. Never surrender!

This article was published on 12 November 2010 by the SolFed group in Brighton. Other recent articles: