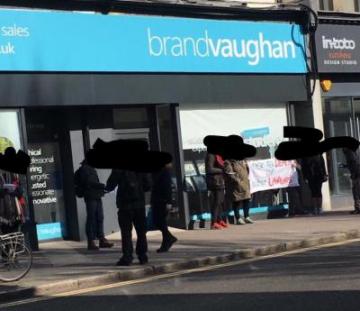 Brighton lettings agency Brand Vaughan is facing a growing campaign by Solidarity Federation, after the agency deducted £390 from the deposit of a student tenant for cleaning and redecoration. The tenant left her room clean, and the deductions made by the agency contain a number of problems, including not evidencing an attempt to procure the most reasonable deal, as they should, and not all of the deductions being sufficiently costed. Moreover, the tenant reported serious concerns regarding the behaviour of her housemates to the agency during her tenancy, which was pertinent to the issues that the agency claim require deposit deductions, and which was the source of a great deal of distress for the tenant, who had to move out because of them. Not only has Brand Vaughan not taken the tenant’s reporting of these issues into consideration – incredibly, they have also included a call-out fee for their subsequent inspection of the property. For lettings agencies, safety comes at a price.

Brighton SolFed has supported the tenant to try and find an amicable resolution to the dispute, with a demand letter delivered to the agency in December 2017, which gave Brand Vaughan an opportunity to resolve the dispute before the commencement of the public campaign, which they did not do. Consequently, our public campaign commenced on 17th January, with an informational picket outside the Hove branch, and has been ongoing since then. So far, both the landlord, who is the Chief Executive of Brand Vaughan, and Brand Vaughan themselves, have refused to refund the £390 deposit, or to pay £541 compensation (10% of the rent paid by the tenant) for the distress this situation has caused to the tenant.

Brand Vaughan have now demanded that Brighton SolFed’s public campaign cease, and that a written retraction is posted on the Brighton SolFed website regarding the claims that the campaign has made. If this does not happen, they say, it is their ‘intention to issue proceedings’ against both ourselves and the tenant.

This email from one of the directors of Brand Vaughan is a clear attempt to intimidate a young woman and student tenant out of taking action for the return of her deposit, made by an agency that stresses its apparently (three year-old) award-winning service. Brighton SolFed responded to this legal threat with a well-received picket of the Hove and Kemptown branches of the agency on Saturday 24th February. In Kemptown, Brand Vaughan attempted to hand-out ‘counter-propaganda’ to passersby, though they received short shrift from most and gave up after around five minutes. Manchester Solidarity Federation also staged a picket of Brand Vaughan’s sister agency in Manchester, Thornley Groves, which saw the branch close after around thirty minutes.

Deposit theft is a billion pound a year industry in the UK, so it’s unsurprising when agencies make deductions to further bloat their profits and line their pockets. They couldn’t survive without it. The problem for Brand Vaughan is that tenants are fighting back, and we will not allow our rightful protest to be dampened by the threat of judicial procedures. Our intention is to bring every dispute onto the streets - not just because it is faster, cheaper and more effective, but also because it is the only way we can understand that each of us has the same problems. Tenants in Brighton and beyond are sick of being mistreated, but we know that our collective action and solidarity is stronger than their threats and intimidation!

This article was published on 27 February 2018 by the SolFed group in Brighton. Other recent articles: