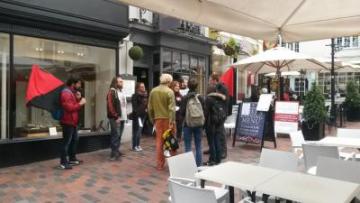 A company that owned two restaurants, both in busy areas of Brighton, decided to claim insolvency. All the workers were called to a meeting to announce that the company was going insolvent and the restaurants would close. Some of the employees were paid off, some were given contracts for a ‘new’ restaurant and some got nothing!

The worker who came to Brighton Solfed had worked there for around 20 months. He was given his last pay slip and P45. Kindly, the company also gave him the contact of the governmental insolvency service. The worker was not given a penny for his last month’s wages, holiday entitlement for that year and gratuities owed over the whole employment. This amounted to a substantial £1964.

Upon contacting the insolvency services the worker found out the company had not been declared insolvent and immediately contacted the owners and accountant. They replied by stating that it takes time to be processed and that he will get his money through the government (whilst fully knowing the worker would not get 100% of his money).

This process of trying to get his rightfully owed money took four months with no effect. In the mean time one of the restaurants that was closed, reopened with the same staff, restaurant name and same owner.

Once the worker contacted us, we started formulating the demand letter together. It became apparent that this was not a simple case. We researched the companies and owners who consistently started and finished multiple companies some with minor name changes, alternating who was a director or secretary. This initially made it difficult to determine who owed the money, but as we found out it was always the same three owners involved, so they owed the money, not some bankrupt company.

The worker along with his partner and three Solfed members went to deliver the demand letter to the opened restaurant. The owners were not present but the manager was there. He nervously accepted the demand letter and agreed to pass it on to the owners. The manager knew of the workers situation, and argued that it was nothing to do with him, and that the owners knew what they were doing. The owners attempted at every opportunity to get out of paying the worker, and using legal loopholes, even though they had the money to pay, as they apparently owned nine other restaurants around the UK.

We gave the owners one month to meet the demands. We also emailed the demand letter twice, as well as visiting the restaurant again to confirm they received the letter.

On the day of the deadline we still had no response so we paid a visit to the restaurant. There were no managers or owners there, so we informed the staff of the conflict (the worker also did this on Facebook with his friends who still worked there) and handed them the informational leaflet of the dispute. We then put the leaflets on the outside tables. Whilst we chatted a senior member of staff called the police (we were informed by a sympathetic employee) but we had left before they arrived.

The owner was set to be there in a couple of days so we planned a picket to have maximum impact. There were 15 people at the picket. Management and the owners were nervous and did not know how to react. They called the police, who informed them of their powerlessness in this situation. The owner tried to plead with the worker and his partner to no avail. The picket finished and finally the owners agreed to meet in the following days.

Four of us including the worker and his partner went to meet the owner. He tried to distance himself from the previous company and threatened that we could not do our actions nor give out leaflets. We assured him we could and would maintain actions until the demands were met. We informed him that we would not accept that he had no responsibilities and that it was only through direct action that we were acknowledged. He offered us £964 cash to stop on behalf of the other owner. We said we would not accept anything less than the amount owed.  He said he would need to talk to the other owner to update him and asked that we stop actions, as it has nothing to do with him. We reminded him that we do not recognise this as a separate business and that we understood the multiple owners were a façade concealing the point of who owed whom. We left with nothing but our resolve.

We then emailed all the owners reminding them of what was owed and why. They requested a meeting with two of the owners to sort this out. We accepted and reminded them that we will suspend actions unless negotiations breakdown.

We arrived for the meeting, but they were 15 minutes late. They sat down and tried to be friendly, claiming we should use the legal routes. We reminded them that they were in the wrong and we maintained our stance. They then offered us £1500 in cash and that was their final offer. Again we stated we wanted the full amount and countered their claims that the gratuities were not owed and other excuses they tried to give. Such as this is nothing to do with this ‘new’ restaurant and the previous company had no money to give, as they were insolvent. We stood strong, then one owner asked the other to make up the difference, which was rebuffed. They then gave us a few minutes alone to discuss, in which we debated potential outcomes but essentially wanted to stay focused on exactly what they owed. Once they came back they said they had a new offer. £1500 cash and the rest made up by instalments over the high season as a reassurance we will not take the money and come back for more. We were shocked by their belief we were as exploitative as them. We were demanding what was rightfully the workers. We accepted this as it was the full amount with the caveat that it must be paid by direct debit same day each week, and that if it is late we will be back to picket the following days.

We left and joined the Brighton Solfed crowd ready to picket in case of no result to applause for the workers success!

Capitalists will hide behind the legal procedures in order to exploit workers whilst maintaining their innocence. Without researching the conflict it would be easy to be brushed aside amidst legal jargon. Through our own education and support we can make clear arguments and keep conflicts open.

Direct action delivers the results as it affects them instantly. Providing pressure both economically and publicly.  Once they have realised this, they will try wriggle their way out any way they can. In this case they tried to dazzle the worker through sums of cash. It is important to be firm and know what you aim to achieve.

Through collective education, action and support we can take on those that exploit us.

This article was published on 19 June 2015 by the SolFed group in Brighton. Other recent articles: