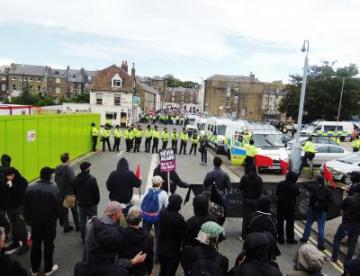 On September the 12th, almost 200 people tried to stop a fascist march against refugees in the streets of Dover. The march was made up of more than 200 members from groups such as National Front, South East Alliance or BNP, with the objective of reaching Dover harbour to the cry of “refugees, go home!”. This triggered violent confrontations with the antifascists and the Police causing several injured people. It is the third fascist demonstration in the city of Dover this year.

We talk with an activist member of Brighton Antifascists Network about the nature of this groups and why it is important to confront them. “We are seen the raising of a hard core of fascists groups lately”, says the activist. From the English Defence League, an Islamophobic “street protest movement” which had “targeted Muslims, got involved in desecrating mosques” and with several members in prison for violence… to the National Front, a collective less active in the streets for the last few years that is getting more active now. “I think National Front has been always more openly racist, even showing Nazi elements”, the activist says. She adds that that demonstration in Dover is “its largest mobilisation in years”.

This two groups and some others (like Infidels, BNP or Combat 18) share a lot of features, all being anti-left, racist, anti-immigration… “There's almost no differences”, she says. In their online propaganda we can find the trace of hatred they are leaving: some of their followers in their social networks are able to make comments such as “I hope their Syrian friends rape and behead them” in a picture of people showing solidarity with the refugees or, in the picture of the drowned Syrian toddler, “one less to be radicalised”.

So, why it is important to confront all this speech of hate and bigotry and how can we do it? “We have always believe that is necessary to physically confront fascists, to make ensure the security of our city”, the activist says, adding that the Anti-Fascist Network has a role in confronting them. “Our tactics are mass direct action: to try to mobilize as many people as possible on the streets. We use film showing, gigs, cultural activities… we try to be present in the community and with other community groups (such as anti racist groups, unions…)”. It is important, she recalls, to create links between these collectives in order to fight together against intolerance. Accordingly, from the Anti-Fascist Network website they say: “NOW is the time to either get involved in your local group, or start one (…) We need to take this growing tide of fascism seriously. (…) It would be unthinkable for 200 open neo-nazis to march like they did in Dover just a few years ago.”

This article was published on 24 September 2015 by the SolFed group in Brighton. Other recent articles: