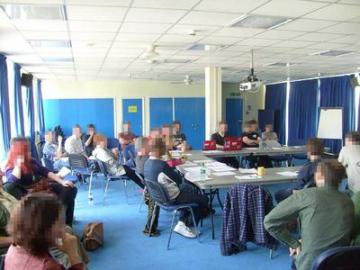 Mayday weekend saw the Solidarity Federation's National Conference come to Brighton. The annual conference is the most important decision-making event in the SolFed calendar, serving to make federation-wide decisions, mandate and hear reports from national officers and commissions and to share ideas and tactics. Delegates from Brighton, Liverpool, Manchester, Northampton, North London, South London, Thames Valley and West Yorkshire locals attended, with only Bristol not represented due to their delegate being ill. This year saw an unprecedented number of motions, reflecting increased activity and membership over the past 12-18 months. Some of the most important decisions included:

-formally accepting the new Thames Valley local into the federation

-agreeing the terms of reference for a community strategy to supplement our industrial strategy, aiming to have a strategy adopted at the next national delegate council in three months time

-the merger of the web, Catalyst and Direct Action collectives into a new media collective, to aid the production of more joined-up and complementary media output

-the support and expansion of our training programme, with a specifically ring-fenced budget set aside for this purpose

-a new logo provisionally adopted, to be confirmed at the next national delegate council in three months time

We also had a number of discussions covering issues such as the current Office Angels campaign, our gender composition and our approach to the media, and set aside time for the Industrial Networks to meet face-to-face. Several intiatives which arose out of this will emerge in the near future.

The conference was felt to be exceptionally positive, and aside from the new initiatives, projects and internal changes, it was an excellent opportunity to meet fellow SolFed members from around the country, to get to know one another, network, debate and exchange experiences. We also welcomed observers from the Syndicalist Youth Federation (SUF) from Sweden, as well as receiving greetings from the IWA secretariat, ZSP in Poland and Organise! in Northern Ireland.

This article was published on 2 May 2011 by the SolFed group in Brighton. Other recent articles: