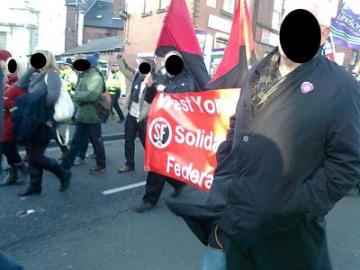 WYSF attended pickets and demos across the north:

In Leeds WYSF joined a picket of a public sector building (name omitted to protect the individual member), before joining the march and demo.  An estimated 10,000 took part, the biggest demo in Leedsin a long while.  SF were joined by AF and quite a few people came up and took papers and expressed support for the Red and Black flags.  Lots of support from the public and the march was “clapped” all the way into the city centre.

Spent the morning on a Hull university picket line with students and lecturers, flyered students about not crossing picket lines, turned away a number of delivery vans. Brought a red and black flag, which was excellent at providing a visible presence.

Then went down to city centre for a 'rally' (bureaucrats doing speeches), used this opportunity to hand out a tonne of Catalysts, and then after running out of papers, handing out more 'Don't cross picket lines'.

The march then set off and we realised what a massive turnout there was (the student turnout was also substantial … really felt like a crowd). We thought definitely 1000, although we also heard 4000 being bandied about.

Whilst the A-B march itself wasn't particularly fantastic, the turnout was incredible and everyone was really lively. Every now and then we stopped outside public sector workplaces and harassed the scabs. Police presence was pretty pronounced. Eventually ended up back in the city centre, had a nutter come and dance whilst holding our flag for a bit, had a drink and then went home.

Hi all, 5am start - I'm knackered! Picketed our gate, 2 cars drove in
so fast that a couple of pickets got bumped and a foot run over, no
one hurt. I had the idiotic idea of flagging a director down and
asking if he'd stand by the strikers - amused me mates but director
was laughing. 3 dozen on the picket and turned a few around. Very
successful and dished out the Don't Cross Picket Lines leaflet.
Went on to the march. We worked it out as being about 3000, but it was
a short march that terminated nowhere. We dished about 80 catalysts
out and then had enough.

11:30 at boro, quiet start....handed out a few catalysts.....by the time we marched several hundreds of people from all unions..........spoke to matt......richard knows matt..........marched a short distance to binns corner and listened to several speakers........spoke to several people interested in lib-com.......swp were there.....jeez they were young...i have hairs on my backside older than them.........peaceful and uneventful day

Bradford Report
On strike. Attended picketline at university from 0830 -1100 approx, then static TUC rally in Centenary Square.
UCU (mainly) and Unison visible picket outside the university was well supported by passing motorists honking their horns in support. Students and passersby leafletted with UCU and Unison leaflets explaining the strike. VC came out to make small talk to pickets at one point, which was nice if you like senior management patronising you about getting cold. No sign of GMB unfortunately. Bradford College picket just down the road well attended. Students Union provided hot drinks for pickets. Despite those still working the place looked much quieter than usual. Unison picket was only 2 people initially, rising to maybe 8 at its height - only the vaguest of information about a picket line had been circulated to members by email the previous day though, so this is not really surprising.
At the TUC rally we shifted a few Catalysts while the barely audible speeches went on in the background and people chatted, kids played and chalked on the floor at our feet. Several hundred there, including various anarchists and the odd Wob. Told by a Morning Star distributing CP member at one point that "we [were] all anarcho-syndicalists really"! How we laughed.
There was talk of Occupy groups in various cities around the country (including Bradford) taking buildings on this day. Good luck to them, here's hoping that they do! Workers could do worse than emulate them (why wait until it's being closed down to occupy your workplace?). We are the 99%. Let's take it all back.

This article was published on 30 November 2011 by the SolFed group in West Yorks. Other recent articles: