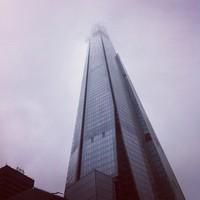 This morning electricians and supporters gathered outside the entrance of the Shard site. The Rank and File Committee deciding to try and keep the momentum of previous months and take the fight to the agencies, (targeting big companies like Mace in particular) who rob workers pay packets week in week out. Agency workers on sites are often ununionised, work far longer shifts and have far less access to proper training than those in direct employment.

It was still not as warm as you'd like it to be but the 100 strong crowd were entertained by good humoured banter on the mike; with some pointing out that even when they built the pyramids they were at least directly employed, worked a maximum of 9 hours a day and got holiday pay...well scratch that last one. Many workers took leaflets going into the sites, as did passers by and commuters, since we were right in front of London bridge Station busy as ever in the rush hour.

The negotiations over the national agreement are ongoing, with the Unite leadership still trying to accomodate the bosses attempts to supposedly ''modernise'' the industry. However, sparks were clearly buoyed up by the recent at least temporary victory over the BESNA agreement, with rank and file activists seemingly finding more confidence to take on issues at their sites than before.

The next Rank and File meeting is this saturday in Manchester, at which electricians will try and hammer out a strategy for taking the struggle forward. Its clear that no-one wants to take their feet of the pedal at the moment, so doubtless we'll see a lot more protests, strikes and occupations in the year to come.

This article was published on 14 March 2012 by the SolFed group in North London. Other recent articles: