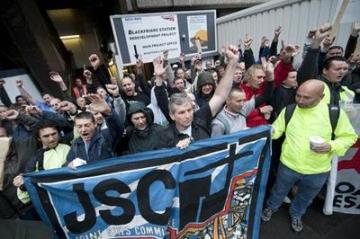 We’ve seen cuts to education, leading to the destruction of EMA, tripled uni fees, mass redundancies and course closures. We’re now witnessing – if we fail to stand up and beat it – the virtual privatisation of education. But the government’s austerity measures are not just attacking education – pensioners, the unemployed, workers in all industries in both public and private sector are all facing massive cuts – leaving no-one spared!

Electricians are facing de-skilling, a 35% pay cut and 1000s of redundancies. Late last year, students and education workers began to fight back against cuts to education – and we were unafraid to break out from the traditional, ineffective forms of protest. Sparks from London to Manchester, Newcastle to Glasgow, have also been fighting back against these crippling cuts. They may not have got as much media attention as us in education, but the rank and file workers have got organised and been blockading, occupying and taking part in unofficial strike action to defend their working and living conditions since September.

This is in the face of longstanding repression against organising in the industry. There are ‘blacklists’ – lists of workers who cause trouble for the bosses, even if it’s just raising a legitimate safety concern – and if your name ends up on there, that’s your chance for a job in the future severely damaged.

As with the struggle against education cuts, their union leaders have hardly been supportive. Len McCluskey, general secretary of Unite union, refused to support the sparks – remember when NUS leader Aaron Porter (now off seeking a cosy career in the in Labour Party) called us “despicable”?

On 9th November, both students and sparks are having national demonstrations in London. To fight austerity we need to fight together! If cuts are forced through in one industry, they’ll try and push them through elsewhere. If cuts are defeated, they’ll think twice about cutting more. Solidarity is strength!

Sparks: Join the student demo! Assemble at 12 noon at the University of London Union (ULU) on Malet Street

Students: Join the sparks! Meet at 7am at the Pinnacle Building Site, Bishopsgate - nearest tube station: Liverpool Street. Or meet at 11 30 am at the Shard, London Bridge, for the national electricians’ demo.