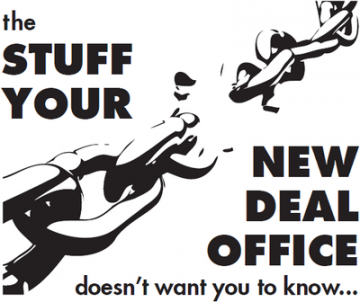 After thirteen years of disgrace the New Deal programme is coming to an end and is being replaced by American style ‘workfare’ - a punishment for unemployment in the form of degrading unpaid work. We need to stand together and resist this new attack on the working class, but in the meantime we’re letting you know how you can win back some time for yourself.

As New Deal is being replaced the DWP have already stopped signing people back onto the course. There is nothing stopping you from signing off for personal reasons tomorrow, and signing back on to regular JSA in a day or two. You’ll lose one or two days of benefit and won’t get put back on New Deal. That’s a good deal.

The real economics of the New Deal
In the labour market the total amount of jobs available depends on the economy. If the government push someone on New Deal harder, and they get a job faster it will be at the expense of someone at the regular job centre, who will end up on New Deal themselves. There is no overall effect on the level of unemployment. The government understands economics; they know New Deal doesn’t reduce unemployment. It is an attempt by the government, influenced by the rich, to reduce our quality of life on benefits. This weakens our bargaining position as workers and claimants when we try to improve our pay and conditions.

By making us desperate they can reduce many jobs pay to minimum wage which means more profit for the bosses. That is if you’re lucky enough to get minimum wage at all. We have experienced firsthand how depressing and boring New Deal is. This isn’t an accident. It is a deliberate attempt to make us desperate enough to accept any unpaid work placement for various major corporations that want free labour to improve their profit margins. Sounds like slave labour?

The Unwaged Workers Network
This leaflet was produced by the Unwaged Workers Network (UWN) of the Solidarity Federation, as part of an ongoing campaign against attacks on welfare for the poor. The Solidarity Federation is an initiative to form a powerful democratic union of working class people to fight for their interests at work, in the community, and at the jobcentre. We organise according to anarchist principles such as direct democracy, direct action and solidarity but you don’t have to be an anarchist to join and get involved in making a difference to our living conditions. Actions speak louder than words; the more we act together the louder we will be heard. Make a difference to your life, get involved today and fight back!