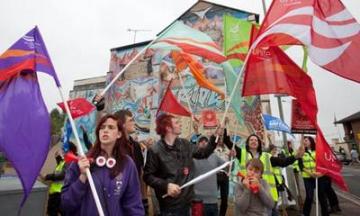 On Tuesday 23 August, youth workers in Oxfordshire went on strike over the County Council's plans to off-load its 26 youth centres in favour of “community hubs”, putting 80 professional youth worker jobs at risk and devastating services.

In Oxford a free coach had been put on by Unite. I joined a group of 20 or so supporters and striking youth workers and set off to the pickets in Banbury.

We arrived in Banbury at around 11am to join the already large and colourful picket at Banbury Youth Centre. This was the second picket of the day after a line at the council office from 8am. The atmosphere was good, considering the situation and the miserable weather, thanks to the large amount of support from passing traffic and pedestrians.

Shortly after 12pm and a short speech, we set off on foot through the town centre to picket the Town Hall and adjoining Bunker Youth Centre. It was initially a fairly subdued affair with one young teenager already concerned about how long we were going to have to stand there. But as more young people arrived to support the workers and fight for their services things soon livened up. Bongos, tambourines and air horns appeared. Groups of young people moved around the square with banners and placards handing out leaflets, stickers and engaging with shoppers.

Around 2pm the group split; some staying at the Town Hall until a rally later that afternoon, some moving down the road to picket Bridge Bar Youth Centre, and others, including myself, to head back to the coach for Oxford.

On the way back there was a lot of praise for the young people that had joined us and were still out on the pickets. One seasoned Trade Unionist and activist said that because of them, it was the best “demo” he'd been on in a long time. I'd have to agree that the youth had made the day.

This strike saw a uniting of service workers and service users; links that are vital if we are to defeat these austerity measures. However, while strikes remain limited to one-day, largely token, affairs, it is difficult to imagine the council or government giving in. We need to organise collectively, outside the limits of trade-union organisation. How about the youth who use the youth centres, as well as non-unionised workers, etc. taking part in meetings that decide the course of action?

Solidarity to all those on strike that day and best wishes in the struggle ahead.

This article was published on 31 August 2011 by the SolFed group in Thames Valley. Other recent articles: