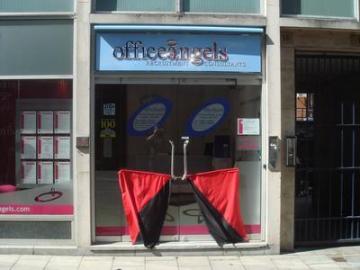 On Thursday 12th, Thames Valley Solfed leafleted outside Office Angels in Oxford, in addition to the pickets that we undertook in Reading.

We had about 10 people over the course of the picket, including friends of SolFed members who were passing & wanted to help out, a member of The Commune up for the day, and other Oxford locals. The office looked deserted at first but a member of staff came out & accepted our leaflet, but produced one of their own which deplored “the need for direct action”.

Not many people went in to Office Angels while we were there & those that did listened to what we had to say & accepted a leaflet, as did 2 firms operating out of offices above, one of which was also a recruitment firm. They did not have a high opinion of Office Angels. Most passers-by took leaflets, many stopped to ask for more info & were very receptive & positive about our action, promising to ‘phone or email Office Angels’. Some asked about SolFed & were directed to the website. Our new black & red flags got their first airing too, causing one Spanish passer-by to ask if we were the CNT (our large and well-known Spanish sister section)!

This article was published on 13 May 2011 by the SolFed group in Thames Valley. Other recent articles: