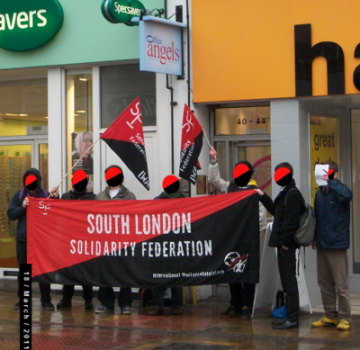 Since March, the South London local of the Solidarity Federation (SF) has been involved in supporting a victimised former Office Angels temporary worker. Dan worked for Office Angels for three days in December of last year. He was assured by the company that the lack of a time-sheet would 'not be a problem'. However, Office Angels are refusing to pay him the wages he is owed - falsely claiming he only worked for one day, despite them having called him at work on his third day. After completely ripping him off, they had the nerve to harass him for seeking advice on an internet discussion forum.

With the help of the North London local we have held pickets outside Office Angels branches across London. The first picket was unannouced and held outside the Wimbledon branch as that was the branch Dan had been working for. SF members entered the office and confronted management, demanding immediate payment of the unpaid wages before the picket was eventually moved on by police.

We publically advertised the second picket in advance to be held outside the same branch but on arrival discovered that they'd decided to close for the day, with "staff training" being offered as an excuse. Seeing that they'd already done our job for us we decided to head to the Oxford Street branch of Office Angels where we again entered the building and demanded to speak with management. Management played nice, promising to speak to the next persons in charge to see what could be done for Dan, but were clearly sweating it. They were not used to a situation where workers were the ones making the demands.

In the following week, we issued a call for messages of protest to sent to the Wimbledon branch, sending emails and phoning Office Angels to complain about Dan's treatment. This acted as an effective "communication blockade" by jamming the methods the Wimbleton Branch office uses to maintain contact with clients and workers. The response to the callout was impressive as numerous International Workers Association sections and other direct action-oriented workers groups in the UK and around the world took part. We also called another picket outside the Oxford Street branch, this was well attended and we had brought along our banners and one demanding payment.

There was brief interference from the police who demanded we remove the tape used to stick up our banner on the boarded up construction site where changes to Tottenham Court Road station are being made. They said it was to save us the hassle of tube workers complaining about property damage to their site! However, when the workers from the site, who had been watching us for some time, came up to us, it was to request a leaflet and even take a copy of our newspaper Catalyst. It was also heartening to hear words of support from other workers coming out of the building where the offices are located, even though they did not work for the temping agency, with several people commenting that they knew "who to come to" when they needed support at work.

That morning we heard the good news that Office Angels had told Dan they would speak to him about getting him paid the wages he was owed, however it seems that once again Office Angels are delaying making the payment of the wages they owe. SF locals around the country were more than glad to offer support.  In Leeds, the West Yorkshire local held a successful picket in support of Office Angels staff. Outside of SF, comrades from the Anarchist Federation and the Industrial Workers of the World have indicated they're ready to hold pickets across Britain if asked.

Until Dan gets paid, we will keep on increasing the pressure we are putting on the company. We want to hear from any current or previous Office Angels employees that have come into conflict with this company and its culture of disrespect. We know that this is not an isolated incident and the more people get involved, the more pressure we can put on the company to start treating its workers properly.

Temporary workers face similar unacceptable conditions every day. They work without sick pay or maternity leave, are vulnerable to unfair and instant dismissals and have no union support. Rising unemployment and a bleak economic climate will force even more of us to accept these precarious conditions - yet another example of working class people being exploited by an economic system that only benefits the rich.

This article was published on 27 April 2011 by the SolFed group in South London. Other recent articles: