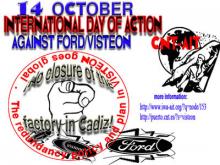 IWA statement regarding the struggle of our Spanish sister section against the closure of a factory owned by Ford-Visteon. (please find aposter attached to this post)

With reference to initiatives taken by the CNT union section at Cadiz Electrónica S.A. Ford-Visteon and the CNT of Jerez, there will be a new International Day of Struggle against Ford-Visteon on October 14.

Over the spring, hundreds of workers at three car parts manufacturing plants across the UK were made redundant. In response, workers occupied the plants and, in doing so, demonstrated that any protection we might have from the ravages of this recession will come not from the generosity of employers, politicians or trade union bosses but from the action we take as rank and file workers.

In June 2000, Ford Motor Company outsourced production of some of its car parts to Visteon, an apparently independent company, but in reality one in which Ford retained a 60% holding. The relatively smooth changeover was negotiated on the promise that the ex-Ford – now Visteon – workers would remain on Ford terms and conditions, including pensions and redundancy packages.

Rob Williams, Unite! convenor at Linamar’s Swansea plant, was reinstated on 11th June. An official indefinite strike was due to begin that day after a ballot resulting in 139 votes for and 19 against on an 88% turnout. Rob had been suspended on 28th April by car-part manufacturer Linamar, which had bought the former Visteon plant in July 2008, claiming an “irretrievable breakdown of trust”. This was met by an immediate walkout by the day shift; Rob locked himself in his office and workers surrounded it in an unsuccessful attempt to prevent his removal from the plant by the police. He was called in and sacked on 7th May.

This was clearly an attempt to break the union and force through attacks on pay, conditions and pensions by “buying down” – offering workers worse contracts in return for a one-off payment. The sacking immediately followed 140 voluntary redundancies and preceded pay negotiations where management were trying to get workers to turn down a Ford-linked 5.25% pay rise. Rob had also been prominent in organising support for the Ford Visteon workers who had occupied factories in Belfast and Enfield and were blockading Basildon.

This resistance doubtless both helped the Visteon workers win a partial victory in their occupation and galvanised Unite! which organised a ballot in record time, the result being announced on 28th May, to head off unofficial action. The fear of militancy in the car industry spreading would have been at forefront of both Linamar and Ford management’s and the Unite! bureaucracy’s thinking. It shows that rank and file militancy, direct action and solidarity work. 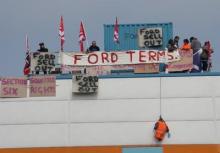 Workers at car parts manufacturer Visteon in Belfast, Enfield and Basildon occupied their factories on Wednesday 1st April, after they were given six minutes’ notice of closure and told to leave immediately. 565 jobs have been lost at Visteon plants across the UK. Left with no alternative, the workers staged a spontaneous sit-in, first in Belfast then spreading to the other two plants.