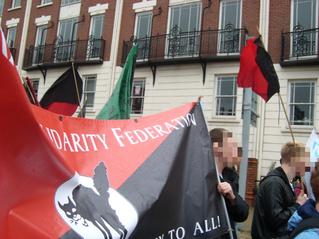 The TUC simply accepted the police moving them away from the Echo Arena, though they later moaned about it to the Liverpool Echo. With the march. Rather than go through the main part of City Centre to the docks, the route may as well have been calculated to garner the smallest possible audience.

But we’ve seen this show before. Union leaders putting on the appearance of being oppositional to authority whilst following orders and acting as a conduit to get the working class to do the same.

It became farcical when the layout of the roads meant the march had to go past the point of protest and turn back upon itself to be able to feed into the rally. There was some laughter and cheering as the Radical Workers’ Bloc simply bypassed this by crossing the road and ending up at the front of the demonstration, beyond even the police.

However, there were cries of “no anarchists” and the police rushed forward to overtake us. This protest against the government was going to do exactly as it was told by the state, every step of the way.

At the rally, where 4,000 trade unionists were all-but funneled into a protest pen, various cossetted union big-wigs took to the stage to offer a bark which is never matched with bite.

Merseyside’s anarchists took this opportunity to hand out a pamphlet titled No War but Class War and make the argument for a self-organised workers’ movement that could not be demobilised from above. The response was largely receptive, and we were able to distribute several hundred leaflets.

We then took the lead from many others who left the bureaucrats to their speeches and went to warm up in the pub. One thing that we have seen, time and again, is that ordinary trade unionists share our assesment of their leaders. But anarchists often consigned themselves to shouting from the sidelines and alienating those who would perhaps be most sympathetic. We wanted to break that mold.

All-in-all, bar a brief and largely pointless appearence from English Defence League supporters later on, the day was a good one. But it will only be a success if people are motivated to organise themselves against capitalism, and rid themselves of the chains of union bureaucracy.

You can download a PDF of the leaflet we distributed today here.

This article was published on 17 October 2010 by the SolFed group in Liverpool. Other recent articles: