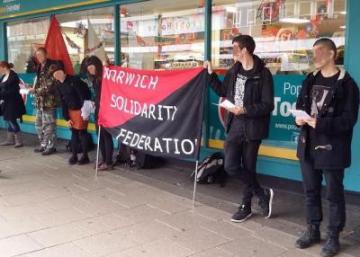 A group of SolFed supporters are launching a new local in Norwich.

Inspired by the actions taken by other SolFed locals across the country, we believe that we can encourage the same, much needed, spirit of collective direct action against oppressive and exploitative forces in Norwich.

We have been meeting fortnightly in Norwich city centre since the middle of 2014 and have already been active under the SolFed banner, most notably through protests against Workfare. We are keen to increase our organisation and action in the coming year and beyond, particularly in the form of localised, specific direct action.

We encourage anyone local to Norwich who wishes to become involved, or wants to discuss anything relating to anti-capitalist ideas, especially how they relate to us on a local level, to get in touch via norwichsf@riseup.net or via our facebook page.