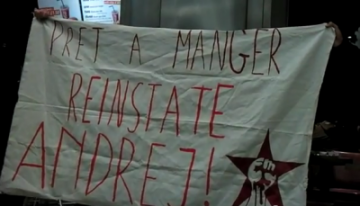 Despite the wet weather, today a member of NLSF joined PAMSU in leafleting some half-a-dozen Pret a Manger shops in central London.  Demanding reinstatement for sacked union activist Andrej, we handed out several hundred leaflets, began conversations with customers, and established contacts with a handful of workers inside the shops.

Andrej's final appeal against his sacking on trumped-up disciplinary charges is this Thursday.  NLSF have been helping to build the pressure against Pret through pickets, solidarity, and an online campaign in support of the the union.

Our mission today, then, was to raise awareness amongst customers of Pret's mistreatment of its workforce.  Management had clearly been warned to be on the lookout for PAMSU activists and their supporters as numerous managers threatened to call the cops on us as soon as we arrived.  The threat never materialised.  Instead, we handed out leaflets to customers and passersby, entreating them to “Support your local barista” and “Good wages and conditions for all restaurant workers, stop union-busting at Pret”.

For a living wage for all Pret workers, respect on the job, and solidarity:
Support the Pret a Manger Staff Union

Are you a Pret Worker?  Get involved in the campaign by emailing pret.staff.union (a) gmail.com or by clicking on www.pamsu.org

Are you a member of an organisation that would like to be involved in the support campaign?  Email northlondonsf(a)solfed.org.uk

This article was published on 27 November 2012 by the SolFed group in North London. Other recent articles: