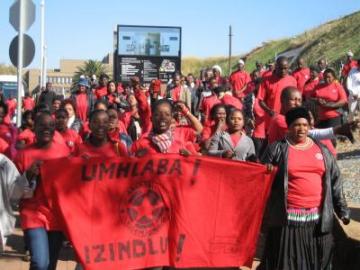 Abahlali baseMjondolo (AbM) is a grassroots, democratic and member-led organisation based in Durban, a city in the KwaZulu-Natal province of South Africa. AbM have an impressive record of exposing corruption and asserting the constitutional rights of thousands of the marginalised shack-dwelling people. We, the undersigned, are in support of the resolve of AbM members to strive for more participatory forms of development and to advance the struggle for access to urban land.

We also note that more than 450 political assassinations have been documented in post-Apartheid South Africa with the majority taking place in KwaZulu-Natal province. We are troubled by the reports of collusion by the police and elected officials in the recent attacks on the Cato Crest. We place our solidarity with all activists facing repression in South Africa.

We believe that it is the right of people to engage in activism that is free of repression.

North London Solidarity Federation stands in solidarity with Abahlali baseMjondolo. Please come to the protest this Saturday 22 November, 14:00 at South Africa House in Trafalgar Square and sign the petition.

This article was published on 18 November 2014 by the SolFed group in North London. Other recent articles: