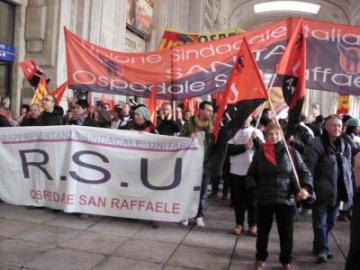 The third demonstration came from the health sector, led by workers from San Raffaele Hospital, where our Italian sister-section, USI-AIT, along with other unions, has been organising resistance to the redundancies of 244 workers.

Fighting also broke out in Turin while demonstrators in Bologna invaded the headquarters of CISL, another of the mainstream unions, which had not called a strike. Numerous occupations also took place, such as that of the Central Station in Palermo, abandoned buildings (to be turned into social centres) in Turin and Brescia as well as the Leaning Tower of Pisa.

This article was published on 15 November 2012 by the SolFed group in North London. Other recent articles: