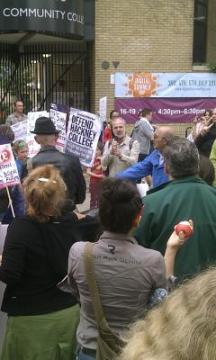 Saturday's market crowds in Dalston were taught a valuable lesson in solidarity today as a large crowd of supporters marched, sang and shouted their opposition to education cuts all the way from Hackney College to Gillet Square.

Neighbours, students, teachers and friends turned out to support the College staff, who are fighting to stop compulsory redundancies and changes to contracts that will make life impossible for language teachers in the borough.

Joined by workers from Tower Hamlets College and Lambeth College, which are both facing their own attacks by bosses intent on upping margins at the expense of education quality, teachers explained that cuts to college funds had failed to fall at the top of the tree even as courses aimed at the people needing it most lost out on funding to politicians' pet projects, such as short Workfare-related courses which have relatively little impact on skills compared to the more comprehensive courses they replace.

The one-and-a-half mile walk up to Gillet Square, made in blazing sunshine, was punctuated by a stop at Ridley Road Market, where a Hackney College UCU rep bellowed a speech in the middle of the street at stallgoers. She argued that the if cuts continue, a college aimed specifically at helping working class people to improve their lives in practical ways would end up teaching on the street, in much the same way...

This article was published on 7 June 2014 by the SolFed group in North London. Other recent articles: