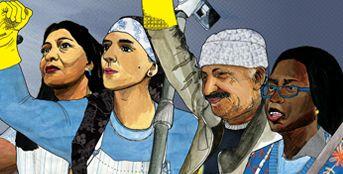 Guildhall cleaners and their supporters, including SF members, held a 5.30am protest yesterday after a union rep was suspended. Sodexho, a company with interests in private prisons and detention centres, took over the cleaning contract on Monday. On Wednesday they suspended the union rep. At one point management even tried to lock him in a room.

The protest was loud and defiant and management called the police three times to try and stop us from using drums and megaphones.  Passers by were sympathetic with one person commenting that the cleaners in her building had also had problems with being paid late.  She took leaflets to give them.

The cleaners at Guildhall have already been on strike over unpaid wages and overtime. These courageous workers need support from the rest of us. They are fighting low pay, unscrupulous subcontractors, and a ruthless hire and fire regime that is going to become more widespread as austerity kicks in. The management know that if the Guildhall cleaners win it will send a message to cleaners and other low paid immigrant workers that you can fight back and win, and so they are trying to defeat them through bullying and intimidation.

There is also a cleaners’ protest at Senate House, Malet Street, this week on Wednesday from 11.30 to 2.30, for the London Living Wage. The contract is with Balfour Beatty, one of the companies trying to break the Joint Industry Board agreements in the construction industry and bring down wages.

This article was published on 13 September 2011 by the SolFed group in North London. Other recent articles: